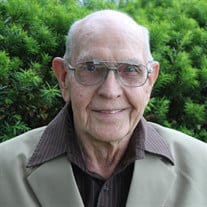 Albert “Ike” Sizemore, age 88 of Buffalo, KS, passed away on Friday, August 23, 2019 in Buffalo, KS. Ike was born on August 27, 1930 in Greeley, KS the son Robert and Birdean (Kelsey) Sizemore. He graduated from Greeley High School. On February 19, 1955 he married Loretta Robertson in Buffalo, KS, she preceded him in death in 2014. Ike worked as a machinist for GEO/Churchill for many years and was proud to have served in the United States Navy. He enjoyed wookdworking, hunting and fishing. Ike was a member of the Masons, American Legion and the Buffalo United Methodist Church. Ike is survived by his sons, Larry Sizemore and wife Dena of Douglass, KS and Terry Sizemore and wife Rhonda of Buffalo, KS; sister, Emma May Hull; 4 grandchildren and 2 great grandchildren. Ike was preceded in death by his parents, wife, Loretta; son James Albert Sizemore and brother, Robert L. Sizemore. Cremation has been requested. The family will have a memorial service on Saturday, September 14, 2019 at 10 a.m. at the Buffalo United Methodist Church in Buffalo, KS. The Chanute Honor Guard will be in Charge of military honors. Memorials have been suggested to Buffalo United Methodist Church. Online condolences may be left at: www.countrysidefh.com. Arrangements have been entrusted to Countryside Funeral Home, 101 N. Highland, Chanute, KS 66720.

The family of Albert Lee "Ike" Sizemore created this Life Tributes page to make it easy to share your memories.

Send flowers to the Sizemore family.