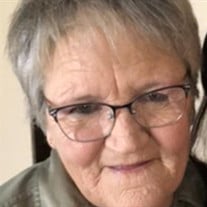 Alice Faye Leach, 66, of Chanute passed away on Sunday, July 4, 2021 at Neosho Memorial Regional Medical Center. Alice was born on November 22, 1954 in Chanute, KS the daughter of Franklin Lee and Alice Bernice (Moore) Shields. Alice was a graduate of Chanute High School, she then continued her education and became a phlebotomist and worked at the local clinics for many years. On October 11, 1983 Alice married Lane Leach. Alice and Lane were married for 34 years until his death in August of 2017. Alice was a member of the Church of Christ in Chanute. She loved life and enjoyed the friendship of everyone she met. Alice was an avid K.C. Chiefs fan and really enjoyed watching their games. She enjoyed all types of flowers but most importantly, she enjoyed spending time with her grandchildren and watching all of their sporting events. Alice will be greatly missed, she is survived by: Children: Travis Leach and wife Adrienne of Chanute, KS Clint Leach of Chanute, KS Step-son Brandon Leach of Bel Aire, KS Mother: Bernice Shields of Chanute, KS Siblings: Buddy Shields of Chanute, KS Anita Shields of Chanute, KS Delbert Shields of Humboldt, KS Five Grandchildren: Kaitlynn Smith (Jeff) of Madison, KS Travis Leach Jr of Kansas City, Regan Smith of Lawrence, KS Rhett Smith of Chanute, KS Tessa Leach of Chanute, KS Two Great Grandchildren: Bowen and Lylah Alice was preceded in death by her father and husband Lane. Cremation has been requested and the family will be hosting a memorial service at a later date. Memorials have been suggested to Autism Hope for Families and may be left with or mailed to the funeral home. Online condolences may be left at: www.countrysidefh.com Services entrusted to: Countryside Funeral Home 101 N. Highland, Chanute, KS 66720

The family of Alice Faye Leach created this Life Tributes page to make it easy to share your memories.

Alice Faye Leach, 66, of Chanute passed away on Sunday, July...

Send flowers to the Leach family.