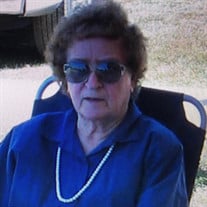 Aliene (Howell) Cannon, age 90 of Sedan and formerly of rural Elk County, passed away June 15, 2020 at Pleasant Valley Nursing Center in Sedan, KS. Aliene was born July 18, 1929 in Longton, KS to Art and Gladys (Armstrong) Howell. She attended and graduated from Longton High School. On December 17, 1946, Aliene married Harry Cannon in Sedan, KS. They were married 62 years until his passing in 2008. Together they had 7 children, raising their family in rural Elk County. Aliene and Harry farmed and ranched together, raising cattle and sheep on their land near Busby, KS. Although farm life took most of their time, they would always find time to go dancing, which she loved to do on Saturday night. They would travel to Altoona and meet up with several couples and square dance. She was a member of the Helping Hand Club in Longton, KS. She attended the Christian Church in Buxton and then later the Baptist Church in Longton. She was also a member of the Senior Center in Longton. Aliene is survived by her daughter, Patricia Snively and husband Joe Sons: Bill Cannon and wife Deanna John Cannon and wife Shari Kenny Cannon and wife Terri Harold Cannon and wife Bobbie 12 Grandchildren and numerous Great-Grandchildren Sister, Shirley Greenburg She was preceded in death by her parents, husband Harry, son Howard, infant son Edwin, great-grandson Tanner Kahler, great-grandson Owen Cannon, sister Irma Blair and brother Dale Howell. Cremation has been requested. Graveside service held on June 27, 2020 at 10:00 am at the Busby Cemetery. Memorials in Aliene’s name can be made to the Longton Senior Center, and can be mailed to or left with the funeral home. Services entrusted to: Countryside Funeral Home, 206 E. Washington, P.O. Box 1233, Howard, KS 67349

The family of Aliene (Howell) Cannon created this Life Tributes page to make it easy to share your memories.

Aliene (Howell) Cannon, age 90 of Sedan and formerly of rural...

Send flowers to the Cannon family.