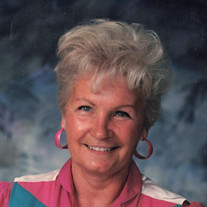 Alta Leola Barnett, 87 of Chanute, passed away Saturday, January 8th at Country Place Assisted Living Center. Alta was born November 20, 1934 in Earlton, Kansas. The daughter of Leo Felkins and Lois (Reed) Felkins. She was the oldest of three children. Alta graduated in 1952 from Chanute High School. Alta was a partner in Wrestler Boats and Campers. Later she worked at Kay’s Hallmark Store, then as a paraprofessional. She loved music and playing the piano. She had a beautiful singing voice. Later in life she found another talent as she learned how to paint, creating several beautiful pictures. She loved being outside, gardening, and canning. She was always willing to try a new recipe and bring it to family gatherings. A family favorite was her homemade noodles. Spunkiness and sassiness were loving terms used to describe her, even when her sons-in-law would heckler her. Family was important to her and she would do anything to help them, not afraid to speak out and fearlessly defend them. Alta is survived by her six children: Marsha Aikins (Kenny), Sand Springs, OK Cindy King (Terry), Chanute, KS Glennis Wilson (Lonnie), Chanute, KS Glenn Wrestler, Jr. (Debbie), Chanute, KS Scott Wrestler, Chanute, KS Tony Wrestler (Dawn) Hahira, Georgia Sister-in law: Phyllis Felkins, Rogers, Arkansas Twenty-six Grandchildren Thirty-four Great-grandchildren Three Great-great grandchildren Alta was preceded in death by her brothers Alvin Felkins and Harold Felkins, Grandsons Kirk Wrestler and Mikey Wrestler. Visitation will be held on Wednesday, January 12, 2022 from 5:00 to 6:30 pm at the funeral home. Funeral service will be held on Thursday, January 13, 2022 at 11:00 am at the Church of the Nazarene in Chanute with burial to follow at Neosho County Memorial Park Cemetery. In lieu of flowers, memorials have been suggested to Tri-Valley Developmental Services or NMRMC Horizon Hospice and may be left with or mailed to the funeral home. Online condolences may be left at: www.countrysidefh.com. Services entrusted to Countryside Funeral Home, 101 N. Highland, Chanute, KS 66720.

The family of Alta Leola Barnett created this Life Tributes page to make it easy to share your memories.

Send flowers to the Barnett family.