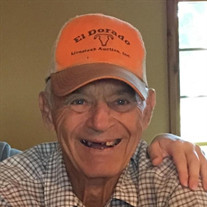 Alton Leroy Coble, age 93 of Howard, KS, passed away Saturday, February 27, 2021 in Howard. Alton was born September 11, 1927 in Howard, KS to Harold and Gladys (Jones) Coble. He graduated grade school from Chaplain Grade School in rural Elk County, then attended Howard High School, graduating in the class of 1944. Alton enlisted in the United States Navy after high school, to serve his country. Upon completing his service, he attended Tulane University, then K-State, graduating with a degree in agriculture. He moved to Wichita, KS and went to work for Beach, but soon decided he would rather farm and ranch, so he moved back to Howard, KS. He moved back into the house he was born and raised in, and continued living there for the rest of his life. He loved farming and ranching and was an active part of the daily activities until his very last days. Alton is survived by his nephew, Tim Coble Nieces, Kathy Evans, Kristin Hutchison, and Julia Coble Sister-in-Law, Virginia Coble He was preceded in death by his parents, and brother, Harold “Gene” Coble Per his request, cremation will take place, with services to be planned at a later date. Memorial contributions in Alton’s name can be made to the American Legion Carter-Rader Post 0149, and can be mailed to or left with the funeral home. Services entrusted to: Countryside Funeral Home, 206 E. Washington, PO Box 1233, Howard, KS 67349

The family of Alton Leroy Coble created this Life Tributes page to make it easy to share your memories.

Send flowers to the Coble family.