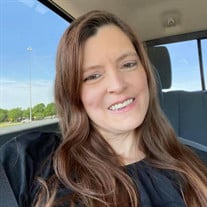 Angela Louise Rush Crisp died on Friday, October 9, 2020 at her home in Locust Grove, OK after a long battle against cancer. Her final days were spent surrounded by family and friends, each of which Angela had touched in her own special way throughout her life. Angela Was born in Chanute, KS on February 12, 1967 to Phillip L. and Carolyn "Jackie" (Spence) Rush. She graduated from Neodesha High School in 1985 and attended Neosho County Junior College. On August 7, 2004 she married Robert Crisp in Eureka Springs, Arkansas and he survives at their home. Most recently, she worked as the Activities Director in the Memory Care Unit at Brookdale of Claremore, OK where she was a blessing to numerous residents and their families along the way. Angela always referred to the journey throughout her fight against cancer as "A Story For His Glory" to which she was able to touch countless lives and help many families along their own personal journeys, most of which she never met. This is a testament of her faith and her willingness to help others. She was a devoted wife, mother, grandmother, and she was a spiritual woman that will be deeply missed by her family, friends, co-workers, and all that knew her. Angela is survived by her husband Robert Crisp, daughter Rachael Doolin of Sand Springs, OK, Ericka Dotson of Lenapah, OK, step daughter Annevieve Mason of Salina, OK, son Hayden Crisp of the home, brother Rusty Rush of Olathe, KS, Sister Gail Beeson of Neodesha, KS and six beautiful grandchildren. She is preceded in death by her parents and step mother Brenda Rush. Funeral Services will be held on Wednesday, October 14, 2020 at 10:30 AM at the funeral home with Pastor Timothy and Barbara Crisp officiating. Visitation will be held one hour prior to service time with burial to follow at Leanna Cemetery. Online condolences may be left at: www.countrysidefh.com. Memorials have been suggested to the Brookdale-Claremore Activities Fund and may be left with or mailed to the funeral home. Services entrusted to: Countryside Funeral Home 101 N. Highland, Chanute, KS 66720

Angela Louise Rush Crisp died on Friday, October 9, 2020 at her home in Locust Grove, OK after a long battle against cancer. Her final days were spent surrounded by family and friends, each of which Angela had touched in her own special way... View Obituary & Service Information

The family of Angela Louise Rush Crisp created this Life Tributes page to make it easy to share your memories.

Send flowers to the Crisp family.