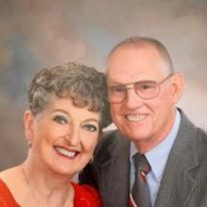 Our beloved parents Melvyn Leon Steele and Arlene Rose Steele went to be with the Lord within 3 weeks of each other. Melvyn, age 83, passed away on May 30, 2021 in his Yuma, AZ home surrounded by his family. Arlene, age 82 passed away on June 20, 2021 in a hospital in Winslow, AZ. Arlene was born in Severy, KS on April, 23, 1939 to Carl L. and Tillie (Stuckwich) Dougherty. She was also a proud graduate of Neodesha High School, class of 1957. She participated in the marching band playing the drums. She also loved playing the piano. Melvyn married Arlene on November 5, 1958 in Bartlesville, OK. They then moved to Los Angeles, CA where they had 3 of their 4 children. In 1964, they moved back to Haysville, KS where they had their 4th child. Together they enjoyed square dancing, and entertaining family and friends. Melvyn enjoyed playing the guitar and singing country music, sometimes with Arlene. He also enjoyed jamming with his buddies. Later on, they loved to travel, and every Christmas went to Arizona and enjoyed going to the Fiesta Bowl. Melvyn retired from Boeing, where he worked in tooling and Arlene retired from Ratheon Corp formerly known as Beech Aircraft where she was a manager over the billing department. After retiring in the early 1990’s, they decided to retire to their favorite destination in Arizona, where they lived in Goodyear and later owned a home in the mountains in Show Low and spent their winters in Yuma. They continued to love to travel where they went to Alaska, Ireland, and Europe. While living in Goodyear at Pebble Creek Retirement Community, they participated in plays, and enjoyed playing golf with friends. Arlene also started a group called Share Bears where they did art and crafts with the elderly women in the community. Also enjoying many luncheons together. After moving to Showlow, Melvyn enjoyed hiking and volunteering for the police department and Arlene volunteered at the Chamber of Commerce. Melvyn later took up karaoke and painting. Melvyn loved the military and was very proud to wear the uniform for the Army Reserves and the National Guard for over 27 years. He retired as a Sergeant First Class (E-7) in Wichita from the Kansas Army National Guard. Our mom and dad will be terribly missed by all of us, until we meet again. They are both survived by their children: Steven Randall and his wife Debbie of Chandler, AZ Terri Lynn Oberst of Norman, OK Kenneth Craig and his fiancé Beth of Wichita, KS Richard Sean and his wife Trish of Wichita, KS 8 Grandchildren: Keaton, Kelsey, Chris, Megan, Ali, Hannah, Craig, and Whitney 7 Great-Grandchildren Melvyn’s Surviving Siblings: Albert Steele of Marion, KS Alberta Jones of Lebo, KS Ronald Steele of Riverton, KS He is preceded by death by his parents and his siblings Loren Edwin, Glenna Laverne, Lois Marie, and Sharon Lynn and grandson, Josh Steele. Arlene is survived by two cousins who were like sisters to her: Mary Chapman Madeline Raile She is preceded in death by her parents and her brother Louis Richard Dougherty and grandson, Josh Steele. A Memorial Service will be held on Saturday, August 21, 2021 at 11:00am at the Countryside Funeral Home, 206 E. Washington, PO Box 1233, Howard Ks 67349 with a graveside military ceremony to follow at the Grace Lawn Cemetery. Honorary Pallbearers are: Steve Steele, Kenny Steele, Richard Steele, Keaton Oberst, Christopher Oberst, Craig Steele Services entrusted to: Countryside Funeral Home, 206 E. Washington, PO Box 1233, Howard, KS 67349

Our beloved parents Melvyn Leon Steele and Arlene Rose Steele went to be with the Lord within 3 weeks of each other. Melvyn, age 83, passed away on May 30, 2021 in his Yuma, AZ home surrounded by his family. Arlene, age 82 passed away on June... View Obituary & Service Information

The family of Arlene Rose Steele created this Life Tributes page to make it easy to share your memories.

Send flowers to the Steele family.