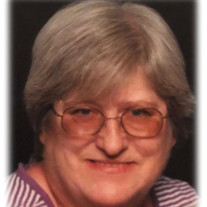 Barbara Jean (Britain) Courtois ran into her Lord’s arms Monday evening, March 29, 2021, at Winfield Senior Community Center, ending her battle with cancer. Barbara was loved for her quick wit and infectious laugh, her teasing smile, her love for her Lord Jesus Christ, family, and Teddy, her dog. And then, we can never forget Barb’s teddy bear and salt and pepper collections that graced her living room! Barbara was born on May 3, 1951, at F.E. Warren Air Force Base, Wyoming, to Clifford and Ivah (Dewey) Britain who both preceded her in death. She was the youngest of five siblings: Deborah and Delbert Britain (deceased shortly after birth), Marilyn Thompson (deceased), and Patty Alexander (James). Barbara was blessed with a nephew, Shane Courtois, whom she took into her home and raised as her own son during his teen years. Barbara’s nieces and nephews enriched her life: Deanna Choens (Michael), Janice Hensy (John), Sam Johnston (Jeff), Michael Bagley (Bobbi), and David Bagley. Barbara was preceded in death by her niece, Jean Bagley. She also is blessed with numerous great nieces and nephews and a great great nephew. If you took the time to know Barbara, you knew that she cherished each member of her church family at Howard Independent Baptist Church. Barbara’s dad was active U.S. Air Force during her elementary school years; therefore, she attended grade schools in California, Texas, Colorado, and Idaho. Junior high and high school were spent in Idaho and Wyoming with Barbara graduating from Evanston High School, Evanston, Wyoming, in 1969. Barbara attended Bible Baptist College in Springfield, Missouri, for a few years and completed training in the medical field. This led her to working in health care until she was hired at Cessna, devoting 13 years of her career as an upholsterer of airplanes—a job that fulfilled her life. Barb loved crafting, making fleece blankets, embroidering, making latch hook rugs, and completing word search puzzles. Country music, especially southern gospel, often filled Barb’s home. Barbara’s greatest friend and companion was her sister, Marilyn. They could tell you each others thoughts, shared laughter, adventures to Dollar General, and walked each other through illness, joy, and heartache. Barbara and Marilyn are once again together worshipping before their Savior’s throne. Daughter, sister, aunt, friend, confidante, lover of life and people, and daughter of the one true King—Barbara, you are loved and missed. See you on the other side. Come soon Lord Jesus! A memorial service for Barbara will held on Wednesday, April 7, 2021 at 1:00 PM at the Howard Independent Baptist Church in Howard, Kansas. Inurnment will follow in the Longton Cemetery, Longton, Kansas Memorial donations in Barbara’s memory may be made to the American Cancer Society or Howard Independent Baptist Church Mission Fund, and can be mailed to or left with the funeral home. Services entrusted to Countryside Funeral Home, 206 E. Washington, PO Box 1233, Howard, KS 67349

The family of Barbara Jean (Britain) Courtois created this Life Tributes page to make it easy to share your memories.

Send flowers to the Courtois family.