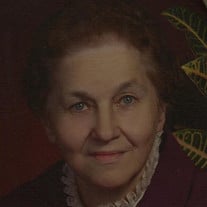 Barbara Lee (Carter) Greenwood, age 87 of Howard, KS passed away February 3, 2020 at Greenwood County Hospital in Eureka, KS. Barbara was born June 26, 1932 in rural Elk County, near Piedmont, KS to James and Roberta (Sloan) Carter. She attended school in Howard and graduated from Howard High School in 1950. On September 20, 1953, she was united in marriage to Bob Greenwood. They were married for 56 years until his passing in 2010. Barbara was a servant of people. It began early in life while working at the local Drug Store during high school, and was evident throughout her life as she was very active in the Howard United Methodist Church where she loved playing the piano, and while working in different offices in the courthouse and the schools. Her love of people never changed, and Bob used to joke with her and say he couldn’t take her anywhere, because it didn’t matter where they went, or how far away from home they were, she always seemed to know someone there. Barbara was active in the American Legion Auxiliary in Howard for 64 years, and one of her favorite things to do was play pinochle, which her and Bob used to get together for many years and play with a group of friends. Barbara is survived by her sons: Rob (Gina) Greenwood of Howard, KS Steve (Rochelle) Greenwood of St. Joseph, MO David Greenwood of Overland Park, KS Grandchildren: Alycen, River (Chrystina), Raven (Lucky), Raina, Sarah, Austin (Heather), Jonah, Gage, Gracie Great-grandchildren: Leia, Dorian Sister: Edith Oakes of Clarksville, TN She was preceded in death by her parents, husband, brothers, Robert Carter and Clifford Carter, and brother-in-law, Larry Oakes Funeral Service will be Friday, February 7, 2020 at 11:00 a.m. at Countryside Funeral Home, 206 E. Washington, Howard, KS 67349 Visitation will be held on Thursday, February 6, 2020, 5-7 p.m. at the funeral home. Memorials are suggested to the Howard United Methodist Church or the Carter-Rader Post #149 American Legion Auxiliary and can be mailed to or left with the funeral home.

The family of Barbara (Carter) Greenwood created this Life Tributes page to make it easy to share your memories.

Send flowers to the Greenwood family.