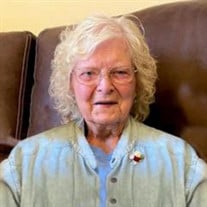 Belva Dean Wallace, 85, of Fredonia, Kansas passed away, with family by her side at Fredonia Regional Hospital on Monday, November 15, 2021. She was born on August 14, 1936 on the family farm in Cherryvale, KS to Sterling and Gladys Henderson. Belva grew up in Cherryvale and graduated from Cherryvale High School. In 1954, she married Robert Wallace and together they had two children, Clipper and Cindy. Belva never lost her sense of youth. Whether it be her love of her great grandchildren, or her love for the outdoors. Belva was fueled to get outside. Be it camping and making “Midnight Runs” on the four-wheelers or tending to her tomato plants, roses and iris’. Belva lived her life to the fullest. Belva enjoyed travel and made many trips via motorcycle through the Ozarks and took many Good Will bus tours in the company of her dear friend, Sally Watts, as far as Canada. Belva was an active member of the Assembly of God Church in Fredonia. Her participation in organizations like Pass It On and the Mercy House were just another extension of her love for her community family as well as her own family. Belva leaves behind her daughter, Cindy (Rusty) Crites of Fredonia, a sister Denise (JC) Voss of Sapulpa, OK, a sister-in-law Jayna Henderson, a former daughter-in-law Mary Conklin of Des Moines, IA, grandchildren Nathan (Sam) Crites and their children Asher and Charlotte of Pittsburg, KS, Stephanie (Dakota) Hildebrant and their son Cameron of Georgia, Brandi (Steve) Williams and their daughter Alicia of Des Moines, IA, nieces and nephews Julie (Steve) Wilkerson, Justin Gildart, Casey and Curtis Voss, Christopher Anspach and his daughter Chelsea, many cousins and several great nieces and nephews. She was welcomed in to heaven by her parents and husband Robert, son Clipper Wallace, sister Corrinea (Dale) Gildart and her brother Kim Henderson. Cremation has taken place and the family will hold memorial service honoring Belva’s life Saturday, November 20 at 11:00am at Grace First Assembly of God. Services entrusted to Countryside Funeral Home, 420 S. 20th St., PO Box 247, Fredonia, KS 66736.

Belva Dean Wallace, 85, of Fredonia, Kansas passed away, with family by her side at Fredonia Regional Hospital on Monday, November 15, 2021. She was born on August 14, 1936 on the family farm in Cherryvale, KS to Sterling and Gladys Henderson.... View Obituary & Service Information

The family of Belva Dean Wallace created this Life Tributes page to make it easy to share your memories.

Belva Dean Wallace, 85, of Fredonia, Kansas passed away, with...

Send flowers to the Wallace family.