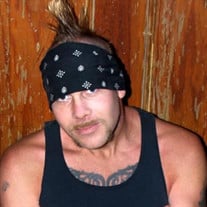 On Saturday, June 26, 2021 at Santa Fe Park Fiesta ground in Chanute from noon until 3:00 pm the family will be sharing memories and starting at 3:00 pm a Celebration of Life with live music will be held. Benjamin Dewey Riley II, 47, of Chanute passed away at his home on Saturday, May 29, 2021, surrounded by friends and family. Ben was born on May 30, 1974 in Chanute, KS to Willard (Bill) and Judy (Bollig) Riley, the youngest of six children. Ben attended Chanute schools among the class of 1992. Immediately after high school Ben became a family man; uniting with Patricia Jensen together they brought 2 children into this world, son Zachariah Riley and daughter Breanna Riley. Ben had a great appetite for many things..mostly for a home cooked meal. He was a talented, dedicated musician and songwriter at an early age, and played in successful bands, performing at weekend festivals and area clubs for many years...producing demos of other musicians out of his home...he was also a creative artist and talented sculptor. He enjoyed building rockets, and 1/6 scale modeling architect for the annual G.I. Joe day, in his sister's backyard...and all the while influencing all of us to be Rock Stars. He was the life of the party and will be greatly missed, and always be in our hearts... gone but not forgotten, Rock on little brother. RIP. Ben is survived by: Children: Zachariah Riley of Springfield, MO Breanna Riley of Chanute, KS Siblings: Jim Riley and Becky of Chanute, KS William Scott Riley and Tonya of Chanute, KS Beverly (Jodi) Bollig of Chanute, KS Cindy Lou Riley of Chanute, KS Numerous nieces and nephews Ben was preceded in death by his parents, a sister Teresa Lynn Bollig and nephew Adam Bollig Cremation has been requested, friends and family will be holding a memorial service at a later date. Memorials have been suggested to the funeral home to help defray costs, and may be mailed or left with the funeral home Online condolences may be left at www.countrysidefh.com Services under the direction of Countryside Funeral Home 101 N. Highland, Chanute, KS 66720

On Saturday, June 26, 2021 at Santa Fe Park Fiesta ground in Chanute from noon until 3:00 pm the family will be sharing memories and starting at 3:00 pm a Celebration of Life with live music will be held. Benjamin Dewey Riley II, 47, of Chanute... View Obituary & Service Information

The family of Benjamin Dewey Riley II created this Life Tributes page to make it easy to share your memories.

Send flowers to the Riley family.