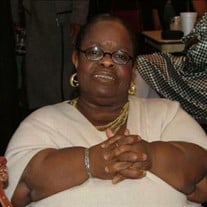 Bessie “Bettye” Mae Anderson was born on January 2nd, 1949 to Bessie Mae Taylor and Thomas Warren Anderson of Humboldt, Kansas. She was the youngest of eight siblings. She received her formal education in Humboldt Public Schools and later continued her passion for education at Emporia State Teachers College, where she earned her bachelor’s degree in Elementary Education. While attending college, she was a member of the Gamma Psi Chapter of Sigma Gamma Rho Inc. She accepted Christ into her life as a child at Poplar Grove Baptist Church and later became an active member of Second Baptist Church in Kansas City, Kansas. While serving in various ministries, she often became known for her arts and crafts that she would make for family and friends. Bettye was most known for expressing her love for God through calligraphy. As Isaiah 40:31 says: “But they that wait upon the LORD shall renew their strength; they shall mount up with wings as eagles; they shall run, and not be weary; and they shall walk, and not faint.” Bettye began her teaching career in the 1970s, serving students in Kansas City Public Schools for over three decades. It is in her students that her teaching motto lives on: “Each One, Teach One.” She knew that every student has potential, and she knew each one of them is better than average. In 1981, God blessed her with a beautiful daughter named Mia. These two became inseparable—they were the tag-team of the Anderson family. Bettye later retired from teaching and took up a new task of being a Grandmother to her only grandchild, Auon’tai. On the morning of June 26, 2021, the Lord peacefully called his beautiful ladybug home to be in the kingdom of joy. As she transitions, Bettye will be greeted by the entire Anderson family: James “Jamie” Anderson, Larry Anderson, John “Sonny” Anderson, Thomas “Tucker” Anderson, Jr., Donna Peterson, Jeannette Walsh, and Marilyn Anderson. She is survived by her daughter Mia Anderson, her grandson Auon’tai Marckeise Anderson, her great-grandson Khalil Justice Anderson, and a host of her nieces, nephews, relatives, students, and friends. Let her legacy live on in the words of our Lord and Savior: “I have fought the good fight, I have finished the race, I have kept the faith. Now there is in store for me the crown of righteousness, which the Lord, the righteous Judge, will award to me on that day—and not only to me, but also to all who have longed for his appearing.” - 2 Timothy 4:7-8 Funeral service will be held on Saturday, July 10, 2021 at 10:30 a.m. at the First Baptist Church in Chanute. Burial will follow in Mount Hope Cemetery in Humboldt, Kansas. Memorials have been suggested to: Gamma Psi Chapter of Sigma Gamma Rho Inc, and may be left with or mailed to the funeral home. Online condolences may be left at www.countrysidefh.com. Service entrusted to Countryside Funeral Home, 101 N. Highland, Chanute, KS 66720

Bessie &#8220;Bettye&#8221; Mae Anderson was born on January 2nd, 1949 to Bessie Mae Taylor and Thomas Warren Anderson of Humboldt, Kansas. She was the youngest of eight siblings. She received her formal education in Humboldt Public Schools... View Obituary & Service Information

The family of Bessie M. Anderson created this Life Tributes page to make it easy to share your memories.