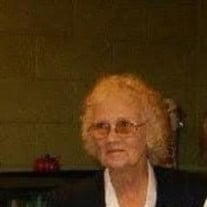 Betty Louise Marmon, 88, of Chanute passed away on Wednesday, February 16, 2022. Betty was born In Chanute, Kansas, the daughter of E.D. and Fleta Marie (Taylor) Howard. Betty grew up in Chanute and attended the local schools until moving to Oregon shortly then back to Kansas. Betty centered her life around her family. Betty loved the outdoors especially fishing, camping, and driving around in the country. She enjoyed playing bingo at the VFW, shopping at the bread store, and all thrift stores. Betty also loved taking care of not only her children, but anyone who needed help. Betty attended the Seventh Day Adventist Church in Chanute and was also a member of the American Legion Auxiliary and the Elks Club. On March 4, 1982, Betty married Gary Marmon in California, they were married for 39 years until her passing. Betty is survived by: Her Husband: Gary Marmon of Chanute, KS Two Sons: Eddie Bridges and his wife Yvonne of Elk City, KS Glenn Bridges of Chanute, KS One Daughter: Tina McCorkendale of Chanute, KS Two Sisters: Sharon Farmer of Riley, KS Dorothy Waltermire of Chanute, KS One Brother: Dale Howard of Newberg, Oregon Numerous Grandchildren and Great-grandchildren Betty was preceded in death by her parents, son Mike, and her siblings: E.D. (Eddie) Howard, Jr., William (Billy) Howard, Hatty Johnson, Ruth Reynolds, Marion Clifford, Barbara Lyons, and Shirley Taylor. Visitation will be held on Monday, February 21, 2022 from 5:00 to 7:00 pm at the funeral home. Graveside services will be held on Tuesday, February 22, 2022 at 10:00 am at Elmwood Cemetery in Chanute. Memorials have been suggested to the Elks Club and may be left with or mailed to the funeral home. Online condolences may be left at: www.countrysidefh.com. Services entrusted to Countryside Funeral Home 101 N. Highland, Chanute, KS 66720.

Betty Louise Marmon, 88, of Chanute passed away on Wednesday, February 16, 2022. Betty was born In Chanute, Kansas, the daughter of E.D. and Fleta Marie (Taylor) Howard. Betty grew up in Chanute and attended the local schools until moving to... View Obituary & Service Information

The family of Betty Louise Marmon created this Life Tributes page to make it easy to share your memories.

Betty Louise Marmon, 88, of Chanute passed away on Wednesday,...

Send flowers to the Marmon family.