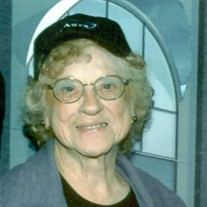 Betty McCready passed away peacefully in her sleep September 6, 2019. Betty Marie Willis was born on November 29, 1919 near Chanute, as the oldest of five children of Reuben and Emma Willis. She was raised and lived in the Chanute area all of her nearly 100 years. Reuben her Father was a farmer, oil producer, inventor of a drilling rig called the Willis Spudder, and started NuWa Industries, the camper manufacturer in the 1960s. Betty attended the then new Chanute Juco where she met her future husband. Following one year at KU she married John Mitchell in 1941 before he enlisted in the Navy. A school teacher for many years, Betty became active in Chanute community organizations upon retirement. Following the death of her first husband in 1987, Betty married Elmer McCready of Thayer, a retiree of the Navy. They traveled and resided in Chanute until his death in 2006. A supporter and volunteer of the Chanute Art Gallery, Betty’s many art students and the gallery will remember her enthusiasm for teaching. Betty and Judy travelled the U.S. taking art lessons and she never tired of learning new things. One of her passions was travel to Europe to view the cathedral architecture, meet the people and search out family heritage in Germany and England. Always curious about the world, Betty never tired of sharing her experiences and knowledge of European history, architecture and art. A health food and herbal medicine advocate all her life, she documented in detail her research findings and shared the knowledge with others. Though she could be stubborn and opinionated about city projects at city commission meetings, those her knew her had to admire the independent attitude, energy, enthusiasm and desire to be constantly productive. She was always assumed to be 10- 15 years younger than her actual age and lived a wonderfully active and interesting life. She will be missed by family and friends, who don’t mourn her passing, but celebrate nearly 100 years of living. She is survived by her sister, Kathleen, three children; Judy Steffen of Chanute, Tom and Rose Mitchell of Thayer and Mike and CeCe Mitchell of Chanute. Four grandchildren and nine great grandchildren live in Texas, Ohio and Colorado. The family will receive friends on Wednesday, September 11, 2019 from 12-1 p.m. at Countryside Funeral Home Gibson Chapel in Chanute, KS. Funeral service will follow at 1 p.m. at the funeral home. Burial will follow at Memorial Park Cemetery in Chanute, KS. Online condolences may be left at: www.countrysidefh.com. The family suggests memorials to be made to the Chanute Senior Center or Chanute Art Gallery and may be left with or mailed to the funeral home Arrangements have been entrusted to Countryside Funeral Home, 16 N. Highland, Chanute, KS 66720.

Betty McCready passed away peacefully in her sleep September 6, 2019. Betty Marie Willis was born on November 29, 1919 near Chanute, as the oldest of five children of Reuben and Emma Willis. She was raised and lived in the Chanute area all... View Obituary & Service Information

The family of Betty Marie McCready created this Life Tributes page to make it easy to share your memories.

Betty McCready passed away peacefully in her sleep September...

Send flowers to the McCready family.