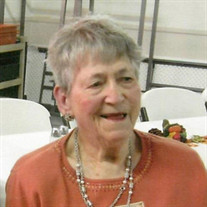 Beulah M. Barker, 92, entered into eternal rest on Sunday, March 14, 2021 surrounded by her family. Beulah was born on January 21, 1929 near Galesburg, KS the daughter of Lee and Opal (Hizey) Ward. Beulah was a graduate of Chanute High School. On December 24, 1949 in Chanute, Beulah married O.V. Barker, Beulah and O.V. were married for 69 years until his death of June 29, 2019. When not taking care of her family, Beulah worked a various sewing factories and a couple different convenient stores. Beulah always had wit and humor to brighten your day. Beulah was a lifetime member of the VFW Auxiliary and the American Legion Auxiliary, she was a member of the First United Methodist Church of Thayer, KS., and the Women’s Methodist Group. Beulah enjoyed quilting, volunteering for the Blood Mobile and taking walks with her dog. Most of all, she enjoyed being with her family and friends. Beulah is survived by: Children: Janet Rehmert and husband Fred of Thayer, KS Mark Barker and wife Mona of Iola, KS Daughter-in-Law: Stacy Barker of Parsons, KS Sister: Nelva Drummond of Chanute, KS Two Grandchildren: Bryan and Justin Rehmert Beulah was preceded in death by her parents, husband O. V., her son Matt Barker and siblings: Fred Bolinger, Wayne Ward, Ernie Ward and Ruby Rogers. Cremation has been requested and the family will be holding a Celebration of Life service on Saturday, March 27, 2021 at 3:00 pm at the Thayer Senior Center. Memorials have been suggested to the: Care Car at Neosho Memorial Regional Medical Center and may be mailed or left with the funeral home. Online condolences may be left at: www.countrysidefh.com Services entrusted to: Countryside Funeral Home 101 N. Highland, Chanute, KS 66720

Beulah M. Barker, 92, entered into eternal rest on Sunday, March 14, 2021 surrounded by her family. Beulah was born on January 21, 1929 near Galesburg, KS the daughter of Lee and Opal (Hizey) Ward. Beulah was a graduate of Chanute High School.... View Obituary & Service Information

The family of Beulah M. Barker created this Life Tributes page to make it easy to share your memories.

Send flowers to the Barker family.