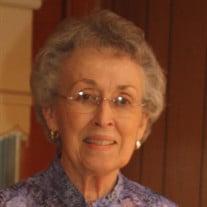 Beverly B. Williams, age 90 of Moline, Kansas, passed away January 19, 2021 at Eureka Nursing Center in Eureka, KS Beverly was born June 11, 1930 in Oklahoma City, Oklahoma to Virgil and Alice (Nesbitt) Hinkle. She grew up alongside one brother, attending high school in Tuttle, Oklahoma, where she graduated in the class of 1948. After high school, Beverly went on to attend Oklahoma Baptist University for one year before transferring to Oklahoma A & M, receiving her Bachelor’s Degree in Home Economics. This is also where she would meet a young man named Bob Williams. It happened to be on a double date when they met, but her date for the evening was Roger, and her childhood friend and college classmate, Lometa’s date was Bob. The twist in the story is that Lometa married Roger, and Beverly married Bob. They all stayed close, dear friends. Beverly and Bob were married August 17, 1952 in Oklahoma City, Oklahoma, one year before Bob graduated Veterinary School. After graduation, the couple packed their clothes in the car and moved to Moline, KS. Together they raised 2 children, and celebrated 68 wonderful years in August 2020. Beverly taught school for a year in Morrison, OK while Bob finished school, then taught for almost one year in Moline, and worked some at the Vet Clinic with Bob. While raising their kids, Beverly was active as a Girls Scout Leader, 4-H Project Leader, and Sunday School teacher. She was also an active member of the Musical and Literary Club, Kansas Cattlewomen, Kansas Veterinary Medical Association Auxiliary, and the First Baptist Church in Moline. She is survived by her husband, Dr. Robert Williams Daughter, Julianne (Curtis) Willhite of Leon, KS 2 grandchildren Nicole Williams Reed (Eve) Williams She was preceded in death by her parents, son, Jim Williams, and brother, Bill Hinkle Funeral service will be held on Monday, January 25, 2021 at 10:30 AM at Countryside Funeral Home, Howard, Kansas Visitation will be held for 1 hour prior to service Interment will take place in Moline City Cemetery Memorial contributions can be made to the First Baptist Church of Moline and can be mailed to or left with the funeral home. Services have been entrusted to: Countryside Funeral Home, 206 E. Washington, PO Box 1233, Howard, KS 67349

Beverly B. Williams, age 90 of Moline, Kansas, passed away January 19, 2021 at Eureka Nursing Center in Eureka, KS Beverly was born June 11, 1930 in Oklahoma City, Oklahoma to Virgil and Alice (Nesbitt) Hinkle. She grew up alongside one brother,... View Obituary & Service Information

The family of Beverly Belle Williams created this Life Tributes page to make it easy to share your memories.

Beverly B. Williams, age 90 of Moline, Kansas, passed away January...

Send flowers to the Williams family.