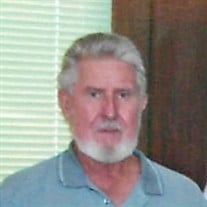 Billie Warren “Bill” Huffman, age 81 of Grenola, Kansas, passed away Thursday, February 11, 2021 at his home. Bill was born June 27, 1939 in Waurika, OK to Harold and Juanita (Sanderson) Huffman. He was raised alongside 2 siblings, and attended school in Elk City, OK, graduating from Elk City High School in 1957. Bill and his first wife, Noreen had 4 boys, Charlie, Russell, Gary, and David. They later divorced. On December 22, 2000, he married Fumiko June Yamani in Wichita, Kansas, combining their families, and enjoying the next 20 years together. Bill worked in the aerospace industry for Beechcraft in the missile division, then retired from Raytheon in 2004. He and June moved to Grenola after retirement to get away from the city life. He was active in the community, serving one term as a Grenola City Councilman. Bill is survived by his wife, June of the home Children Charlie Huffman and wife Julie of Valley Center, KS Russell Huffman and wife Susan of Clearwater, KS Gary Huffman and wife Kristine of Derby, KS David Huffman Tony Nicks and wife Ginger of Beaumont, CA Lori Shaddock of Richland, MO Brother, Lloyd Huffman and wife Wanda of Waggoner, OK Sister-in-law, Marilyn Huffman Several grandchildren, a great-granddaughter, nieces and nephews He was preceded in death by his parents, and brother, Jimmy Huffman Cremation has been requested, with no services planned at this time. Memorial contributions can be made to the Grenola Volunteer Fire Department and can be mailed to or left with the funeral home. Services entrusted to: Countryside Funeral Home, 206 E. Washington, PO Box 1233, Howard, KS 67349

The family of Billie "Bill" Huffman created this Life Tributes page to make it easy to share your memories.

Send flowers to the Huffman family.