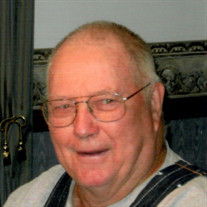 Billy Dean Ward, age 88 of rural Fredonia, passed away peacefully at his home on Thursday, March 3, 2022. Bill was born November 22, 1933 to Leo and Margaret (Butner)Ward at their farm approximately 9 miles southwest of Fredonia. Dr. Riley of Benedict delivered baby Billy for a sum of $ 25. Billy was the name on his birth certificate but most of the time he preferred Bill. Bill attended Ten Penny and Maple Grove schools during his early years and graduated from Fredonia High School in 1951. Bill and Judy Fester were high school sweethearts. Bill and Judy were married in May 1952. Bill and Judy farmed and raised their five children 6 miles west of Fredonia. Bill often worked hard and long hours with his farming and bulldozer business. But he truly enjoyed hunting with his many friends, whether it was the local deer, coyotes, and other game as well as group trips to western Kansas, Colorado and Canada. Besides hunting, Bill also was an amazing artist in his spare time. Drawing pictures, making wood carvings, and even creating two elaborate wood miniature houses with many details that were featured in the local newspaper as well as exhibited at The Stone House Art Center. Bill was preceded in death by his wife of 66 years, Judy (Fester) Ward in 2018, his daughter Diana Marie; and his parents Leo and Margaret Ward. Bill is survived by his children Debra (Greg) Chapman of Goliad, Texas; Doug (Nancy) Ward of Galva, Kansas; Chuck (Juli) Ward of Fredonia, Kansas; and Karen (Tim) Smith of Larned, Kansas; nine grandchildren and 17 great grandchildren. Bill also has two sisters Thelma (Dwight) Hise of Topeka and Doris Claiborne of Fredonia. A memorial service will be held at 11:00 AM on Friday, March 11, 2022 at Countryside Funeral Home in Fredonia. The family will receive friends prior to service at visitation from 9:30 AM until service time. In lieu of flowers, the family requests that memorial contributions be made to The Old Iron Club and can be mailed to or left with the funeral home. Services entrusted to Countryside Funeral Home, 420 S. 20th, PO Box 247, Fredonia, KS 66736.

The family of Billy "Bill" Dean Ward created this Life Tributes page to make it easy to share your memories.

Send flowers to the Ward family.