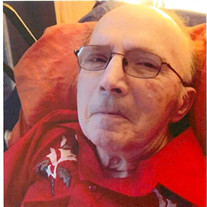 Carl E. Baker age 75, of Iola, KS passed away on Wednesday, December 9, 2020 at his home. Carl was born on February 28, 1945 in Iola, KS the son of Merrill W. and Louise Ruth (Brown) Baker Sr. On January 14, 1974, Carl married Diana Walters. Carl and Diana have been married for 46 years and she survives at their home. Carl worked as a roofer for many years until he was no longer able due to M.S. Carl was a member of the Community Baptist Church; he enjoyed going fishing when he could, watching football and baseball and old westerns on TV. Being with his grandchildren was his highlight in life. Including his wife Diana, Carl is survived by: Children: Teresa McKowen (Jim) of Grand Jct, CO Kathy Starr of Denver, CO Danny Baker of Grand Jct, CO Michele Baker of Grand Jct, CO Angela Cline (KC) of LaHarpe, KS Crystal Goodner (Craig) of Chanute, KS Chris Baker (Katie) of Chanute, KS Siblings: Gary Baker of Gas, KS Merrill Baker Jr of Miami, OK Kenneth Baker of Holland, MI Louise Weohr of Iola, KS Fransico Baker of Mexico Jim Baker of Afton, OK 14 Grandchildren, 20 Great Grandchildren and 6 Great-Great Grandchildren Carl was preceded in death by his parents, daughter Kasondra Berry, and siblings David Baker, Allen Baker and Shirley Baker. Graveside services will be held on Tuesday, December 15, 2020 at 2:00 pm at Highland Cemetery in Iola. Visitation will be held on Monday, December 14, 2020 from 5-7 pm at Countryside Funeral Home in Chanute. Memorials have been suggested to the Multiple Sclerosis Research Foundation and may be left with or mailed to the funeral home. Online condolences may be left at: www.countrysidefh.com. Services entrusted to: Countryside Funeral Home 101 N. Highland, Chanute, KS 66720

The family of Carl E. Baker created this Life Tributes page to make it easy to share your memories.

Send flowers to the Baker family.