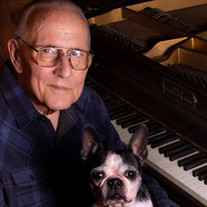 Dr. Carl Leon Hazen finished his pilgrimage on earth March 23, 2020; and he has gone to sing with his Savior’s choir. He started his life, born to Elma and Carl Hazen, on October 24, 1937 just 3 ½ miles southeast of Guthrie, Oklahoma. He grew up outside Stark, Kansas where he began his schooling in a one room schoolhouse. He later graduated from Grant High School in Stark. It was there that, recognizing Leon’s love of music and work ethic, his music teacher introduced him to the art of piano tuning, a skill that turned into a lifetime hobby and business. During Leon’s senior year in high school, he enlisted in the National Guard. He was commissioned 2nd Lieutenant in Artillery from U.S. Artillery and Missile School, Ft. Sill, OK. He then attained the rank of captain as Company Commander in the Chanute National Guard. He also had Military Police training in Ft. Gordon, GA and Quartermaster training in Ft. Lee, VA. He served in the National Guard for 14 years. Leon attended and graduated from Neosho County Junior College with his Associate in Arts Degree. He then received his degrees of Bachelor of Science in Education and and Master of Science in Education from Pittsburg State University. Following those degrees and some teaching experience at Murray Hill Elementary School, Royster Junior High, Chanute High School, and a time at Neosho County Community College, he attended North Texas State University. There he developed an English Composition Curriculum as a part of his doctorate that would later be used as a significant part of the curriculum at Neosho County Community College. Neosho County Community College was the campus to which Dr. Hazen returned with his degree, Doctor of Philosophy - College Teaching (English), and spent just over 30 of his 36 year teaching career in English Instruction before retiring in 1996. While at Neosho County Community College, he was an instructor and division chair and spent two years as acting Vice President for Instruction. He married his partner in life, Janice Lynn Young in 1961 in the First Christian Church of Chanute. They have two daughters, Shelly Rommel (married to Bryan Rommel) of Bucyrus, KS and Marci Hennen (married to Greg Hennen) of Independence, KS. They have been blessed with four grandchildren. They are Colton Rommel, Lyndsy Rommel, Bailey Hennen, and Ashlyn Hennen, each of whom likes to claim to be the favorite. Leon enjoyed many things including family (especially grandchildren), friends, traveling with Janice, his dog Murphy, reading many different kinds of literature, and picnics at his family farm to mention just a few. Leon loved the Lord, attended church all of his life and has been a member of First Christion Church for 55 years. There he joyfully served as choir director, Sunday School teacher, choir member, elder, and faithful servant wherever needed. His love of the Lord and music also led him to sing as a member of the Sekanaire Quartet. Though he would not have shared honors about himself, he served for a time as President of the Kansas Association of Community Colleges. He was selected as Outstanding Faculty Member of the 12 state Western Region of States. He received an Award of Merit from the Kansas Association of Community Colleges, and he was asked to serve as a Consultant / Evaluator for the North Central Association, Commission on institutions of Higher Education. He was preceded in death by his parents; his sister, Doris Lacey; and Linda Vennemann, his niece. He also had one surviving niece, Judy Lacey; and 6 nephews, Wesley Young, Marty Young, Darryn Young, Brian Young, Kris Young, and Cale Young. Due to recent health concerns over the COVID-19 and requirements put forth by the CDC, there will be a small service of immediate family only with no visitation. In lieu of flowers or gifts, please make any desired donations to The First Christian Church Disciples of Christ in Chanute or Home Health & Horizon Hospice that has done an amazing job of assisting with needs at this time. These can be mailed to: First Christian Church - or - Home Health & Horizon Hospice 102 North Grant 1709 West 7th, P.O. Box 426 Chanute, KS 66720 Chanute, KS 66720 (620) 431 - 3758 (620) 432 - 5436

Dr. Carl Leon Hazen finished his pilgrimage on earth March 23, 2020; and he has gone to sing with his Savior&#8217;s choir. He started his life, born to Elma and Carl Hazen, on October 24, 1937 just 3 ½ miles southeast of Guthrie, Oklahoma.... View Obituary & Service Information

The family of Dr Carl Leon Hazen created this Life Tributes page to make it easy to share your memories.

Send flowers to the Hazen family.