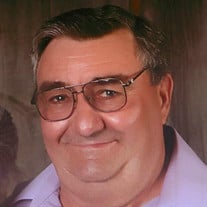 Carl Max Morgan, 83, of Howard passed away Sunday, February 7, 2021. Carl was born on June 28, 1937 in rural Howard to Elias and Hazel (Story) Morgan. He attended Fiat rural grade school and graduated from Howard High School in 1955. After high school, Carl worked in Wichita, KS for Cessna Aircraft. Following his career there, he moved back to Howard to pursue a career in farming. On August 12, 1967, he married the love of his life Susan Dale Harrod. To this union were born 3 daughters; Darla, Marla, and Carla. They lived on a farm Northeast of Howard where Carl farmed and raised hogs. In 1985, Carl and Susan purchased Toot’s Drive In located along Highway 99 in Howard, KS. They ran a successful business until retiring in 2002. During his retirement, Carl enjoyed woodworking, gardening, traveling, as well as watching any sporting event, whether it be his grandchildren playing or professional, he loved them all! In his adult life, Carl was an active member in the community of Howard. He served on the Howard Fair Board and held the title of President for many years. He was a member of the local school board, the Odd Fellow Lodge, and the United Methodist Church of Howard. Carl also served on the building committee for the church which was constructed in 1997. He also enjoyed spending his mornings drinking coffee at Toot’s. Carl is survived by his wife, Susan Brother, Curtis Morgan of Howard, KS Sister, Virginia Tompkins of Scottsdale, Arizona His legacy continues with his three children: Darla (Bryan) Hampton of El Dorado, KS Marla (Tim) Dies of Rose Hill, KS Carla (Matt) Hilton of Eureka, KS Six grandchildren: Logan (Jamie Richardson) JuAire, Chelsea (Barry) Hebb, Caitlin (Shaylee) Marez, Heath (Shayna) Winn, Brooklyn and London Hilton Eight great-grandchildren: Ava, Breken, Emery, and Remie Hebb, Stetson and Roper Winn, Paxton Pitchford, and Saylor Marez He was preceded in death by his parents, Elias and Hazel Morgan, sister Jean Webster, sister-in-law Louise Morgan, brother-in-law Harold Tompkins, nephew Jeffery Morgan, and niece Jeanette Garduno. Visitation for Carl will be held on Thursday, February 11, 2021 from 4:00 to 6:00 PM at Countryside Funeral Home in Howard, KS The family will hold a private funeral service Memorial contributions can be made to the Howard Public Swimming Pool, or Victory In The Valley, and can be mailed to or left with the funeral home. Services entrusted to: Countryside Funeral Home, 206 E. Washington, PO Box 1233, Howard, KS 67349

The family of Carl Max Morgan created this Life Tributes page to make it easy to share your memories.

Send flowers to the Morgan family.