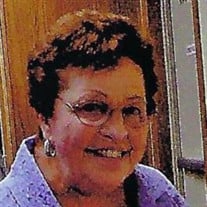 Catherine F Cummings of Moline, KS passed away peacefully the morning of Friday, March 20th, 2020. She did it her way with her love of 66 years Lon R. Cummings giving her a kiss on the forehead and being in her home. Catherine was 84 years old, born May 17, 1935 in Kansas City, Kansas to Coriene and Pat Lewis. She grew up as a normal child during those days of WW2. She enjoyed playing games with her two elder brothers. In the 1940’s, she and her brothers learned to tap dance. They danced at recitals that took them to Wadsworth and other hospitals for injured servicemen. She and her brother George would often place first in competition tap and ballroom dancing. Her chosen career turned out to be a secretary and was an excellent typist. So much so, that when she worked for AT&T, she broke several IBM selective typewriters by typing too fast. In 1952 she was blessed with another brother 16 years younger than her. In 1954 on street corner in Kansas City, she met her lifelong love. The stories differ in content but the way it’s told is there was a young Air Force airman cruising the streets and happened to notice Catherine standing at a street corner. We don’t know how the contact was initiated but we understand that a flash of a little leg was involved. The rest is history. She was married to Lon R Cummings in February of 1954 and bore him two sons, Richard J Cummings and Patrick B Cummings. Catherine was a strong and independent woman as she traveled the world with Lon being in the Air Force. She often ran the household and raised the boys on her own due to remote duty assignments for Lon. She was tough on the outside but nothing but marshmallow on the inside. You absolutely did not mess with Lon or the boys but at the same time, if she received flowers from either, she would end up bawling. Her favorite things were getting hugs and kisses from Lon and the boys. She had an impressive career as an executive secretary and administrator. She was indispensable as secretary to group commanders at the various bases Lon was stationed. She had an outstanding professional reputation was know to take care of her bosses. Basically, you didn’t see the Commander unless you had her approval. She was known to have scared off lower ranking officers. She was also a program administrator and legal secretary. She ran a tight home. Always impeccably clean. The shoes came off at the door. Her sons always had a running joke that when her house was filthy dirty, you could still eat off the floor or perform surgery. She had her rules in raising the boys. They were always dressed well and cleanly. Manners were very important as well as respect. Catherine’s justification for enforcing the rules, “I’m the big M”. That being she’s the mom. She rarely used “I’m going to tell your Dad”. You just didn’t mess with “The Mom”. She was involved in so many things during her life. She learned to oil paint while in Alaska where she has her own personal collection of Alaska landscapes. While in Oklahoma, they square danced extensively and was part of a club that traveled to large dances. She was part of the boys Little League organization lending her organization and administrative skills. She always attended, the boy’s activities to cheer them on and support them. Catherine and Lon obtained positions at Oklahoma State University. She dearly loved the university atmosphere and campus. If she bled, she would bleed orange. She would routinely have exchanges with those from other universities. All in good fun. Lon and Cathy retired to Moline, Kansas where Lon was raised. They set up a home and land, and raised cattle for many years. She was very involved in Moline Christian Church. One of Catherine’s favorite memories was for her and Lon’s 65th wedding anniversary. All the kids and grandkids were able to converge on Moline to celebrate. Her house was full. Everyone sat around the big dining room table, talked and laughed. It was noisy. Her and Lon sat in the living room in their recliners like King and Queen and enjoyed the noise. I don’t think she was every happier that those days. Catherine is survived by her husband Lon Cummings of Moline, Joe (Judy) Lewis (brother) of Moline, George (Bobbie) Lewis (brother) of El Dorado, Bill Lewis (brother) of Severy, KS, her sons Richard J Cummings of Moline and Patrick Cummings of Rolling Prairie, IN. She is also survived by her grandchildren Joshua (Rachel) Cummings of Griffith, IN, Tonya (Lee) Cummings Hansen of Champaign, IL, Nicholas Cummings (US Air Force) stationed in Salt Lake City, UT, Caitlin Cummings of Atlanta, GA, and Meghan Cummings of Ballston Spa, NY. Her great grandchildren are Noah Cummings in Griffith, IN, Bo Hansen of Champaign, IL, and Sloan Hansen also of Champaign, IL. Thank you to all who have expressed their condolences to the family. Catherine’s influence was widely felt and she will be missed. There will be a memorial service for both Lon and Catherine on Saturday, April 17, 2021 at 11:00 am at the Moline Christian Church. In lieu of flowers or gifts, donations can be made to Moline Christian Church, and can be mailed to or left with the funeral home. Services entrusted to Countryside Funeral Home, 206 E. Washington, PO Box 1233, Howard, KS 67349

Catherine F Cummings of Moline, KS passed away peacefully the morning of Friday, March 20th, 2020. She did it her way with her love of 66 years Lon R. Cummings giving her a kiss on the forehead and being in her home. Catherine was 84 years... View Obituary & Service Information

The family of Catherine "Cathy" Cummings created this Life Tributes page to make it easy to share your memories.

Catherine F Cummings of Moline, KS passed away peacefully the...

Send flowers to the Cummings family.