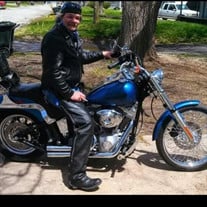 Cecil Ray Mader, 61, of Altoona, KS passed away on Saturday, January 29, 2022 at Wilson Medical Center in Neodesha, KS. He was born on May 11, 1960 in Neodesha, KS, the son of Preston and June (Matney) Mader. Cecil and his brother Richard lived with their grandparents Chester and Gearldene Matney from the age of 6 & 7 years old. Cecil attended Fredonia Schools with the class of 1978. He worked at Cobalt Boats in Neodesha, KS and later as a welder at Full Vision in Newton, KS. Cecil married Wanda Hull on November 27, 1982, they were later divorced. To this union were born a son, Michael Eugene and a daughter Teria Michelle. He later married Janice Harshman, they later divorced. Cecil will never be forgotten, especially the advice he always gave his loved ones, “It’ll all come out in the wash…. Just give it time.” Cecil is survived by: Mother June Dunham of Parsons and Stepfather Bob Dunham of Pittsburg, KS Children: Michael and wife Erin of Hillsboro, KS Teria Mader of Cassoday, KS Stepchildren: Ginger Hoffner of Durham, KS Tina Letterman of Abilene, KS Jake Harshman of Owasso, OK 6 grandchildren: Seth, Sean and Sage Mader of Hillsboro, KS Aden, Isis and Andromeda Coats of Cassoday, KS Step Grandchildren: Tasha, Marshall and Nicholas Hoffner, Kayla and James Letterman Three uncles and one aunt that he was known as “little brother” to, Gary Matney of Wichita, KS, David and Paul Matney of Parsons, KS, Aunt Terri Jo Matney of Iola, KS Nephew Travis Murphy of Miami, OK And several cousins that knew him as “Uncle”, numerous other cousins and friends He was preceded in death by his brother Richard Mader and grandparents Chester and Gearldene Matney. Cremation has been requested with no services at this time. Memorials have been suggested to the American Heart Association and can be mailed to or left with the funeral home. Online condolences can be left at www.countrysidefh.com. Services entrusted to Countryside Funeral Home 420 S. 20th St., P.O. Box 247, Fredonia, KS 66736.

Cecil Ray Mader, 61, of Altoona, KS passed away on Saturday, January 29, 2022 at Wilson Medical Center in Neodesha, KS. He was born on May 11, 1960 in Neodesha, KS, the son of Preston and June (Matney) Mader. Cecil and his brother Richard lived... View Obituary & Service Information

The family of Cecil Ray Mader created this Life Tributes page to make it easy to share your memories.

Send flowers to the Mader family.