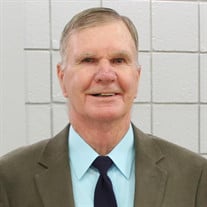 After a long battle with cancer, Cecil E. Watts entered eternal rest on Monday, March 15, 2021. Cecil was born on November 15, 1941 to Ned and Ruth (Dietrich) Watts in their family farmhouse east of Chanute, Kansas. Cecil attended school at North Valley, a one room schoolhouse, through third grade. He went to St. Patrick Catholic School in Chanute from 4th to 9th grade where he was part of the first graduating Junior High class at St. Patrick’s in 1956. Cecil Graduated from Chanute High School in 1959 and Neosho Community Junior College in 1961. Cecil served in the Kansas National Guard from 1963-1969. He worked in his early years at Pioneer Hardware and then Kustom Electronics in the law enforcement radar department. Cecil then worked as a letter carrier for the Chanute Post Office for 26 years, retiring in 2002. What he liked best about being a letter carrier was talking to his customers and giving presentations to grade school classes about delivering mail. He was also a lifetime farmer and worked many decades in partnership with his brother Mike. Cecil married Kathleen Debbrecht on May 6, 1972. He and Kathy were foster parents for 10 years. He was a member of St. Patrick Catholic Church in Chanute, the Knights of Columbus Council 1046, and the 4th Degree Knights of Columbus. The Kansas State Knights of Columbus Family of the year Award was presented to the Cecil Watts Family in 1993. He was preceded in death by his parents, Ned and Ruth Watts. Cecil is survived by his wife, Kathleen; children: Marcia Freeman (David) of St. Louis, MO, Karen Fresh (Eric) of Maize, KS, Paul Watts (Nichole) of Loveland, CO, and Austin Suzanne Watts of Fredonia, KS. Grandchildren are Estela, Robbie, Hailey, Silas, and Octavia. Siblings are Jean (Alex D.) Stuchlik, Phyllis (Craig D.) Thompson, Nancy (Greg) Krueger, Michael (Barbara) Watts, and Tim (Cheryl) Watts and numerous nieces and nephews. Funeral services will be held on Friday, March 26, 2021 at St Patrick Catholic Church n Chanute with a Rosary at 10:15 a.m. followed by the celebration of Mass at 11:00 a.m. The family requests that those attending wear face masks. Burial will be in St. Patrick Cemetery. The family is requesting that in lieu of flowers, memorials be made to The Cystic Fibrosis Foundation or to St. Patrick Catholic School in Chanute. Memorials can be mailed and or left with the funeral home. Services under the direction of Countryside Funeral Home 101 N. Highland, Chanute, KS 66720

The family of Cecil E. Watts created this Life Tributes page to make it easy to share your memories.

Send flowers to the Watts family.