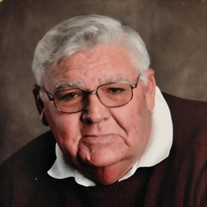 Charles William Barnett, age 78, of Altoona, KS passed away Wednesday, November 18, 2020 at Neosho Memorial Hospital. Charles was born on March 21, 1942 in Longton, KS the son of Frank and Margie (Weber) Barnett. Charlie as everyone knew him was a graduate of Fredonia High School Class of 1959. Charlie joined the U. S. Army and served as an Artic Infantryman with a mechanized unit in Fairbanks, Alaska. Charlie was also a member of the Army's Competitive shooting team while stationed in Fairbanks. Charlie returned to Fredonia and took a job working for the State Highway Dept. A few years later he started his own bulldozing business and worked for countless farmers and contracted with the Wilson County Soil Conservation Office for several years until an injury forced him to quit. Later he took a job with the City of Chanute as a dozer operator. Charlie married Dorothy Moffatt upon returning to Fredonia, Kansas after his military service and began to grow his family. He was involved with the community as a member of the Altoona Lions Club, and as a volunteer firefighter. Charles enjoyed his family and volunteered as a den father for the Cub Scouts and assisted in coaching the T-Ball teams his boys participated on. Charlie instilled a sense of duty and devotion to the country as well as a wonderment for travel into his two sons who continued the family legacy of serving in the Armed Forces. Later in life, Charlie enjoyed fishing and became involved with starting and building a community garden with the church. Charlie's main passion as a hobby was sawmilling. He built his own sawmill and used it a few times. Charlie was also known as a great cook. Having built a smoker and at times, he catered to select friends often smoking deer shoulders or other requested specialties. Charlie enjoyed his grandkids and great-grandkids very much. Charlie is survived by: Children: Clint Barnett of Altoona, KS Daron Barnett and wife Julie of Bentonville, AR Kimberly King and Jerry Beck of Chanute, KS Holly De La Torre and husband Joe of Chanute, KS Sisters: Mildred Strome of Herington, KS Marge McCarver of Tulsa, OK Joyce Woodall of Jefferson City, MO 8 Grandchildren and 7 Great Grandchildren Charles was preceded in death by his parents, son Aron Barnett and siblings Joseph Barnett and Joanne Lambert. Anyone with a good story to tell about Charlie is encouraged to share. Cremation has been requested, and a memorial service will be planned at a later date due to Covid 19. Memorials are suggested to Neighbors to Neighbors (Family Food Assistance) and may be left with or mailed to the funeral home. Online condolences may be left at: www.countrysidefh.com Services entrusted to: Countryside Funeral Home 101 N. Highland, Chanute, KS 66720

Charles William Barnett, age 78, of Altoona, KS passed away Wednesday, November 18, 2020 at Neosho Memorial Hospital. Charles was born on March 21, 1942 in Longton, KS the son of Frank and Margie (Weber) Barnett. Charlie as everyone knew him... View Obituary & Service Information

The family of Charles William Barnett created this Life Tributes page to make it easy to share your memories.

Send flowers to the Barnett family.