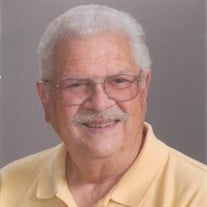 Charles “Chuck” Howard Carpenter, 82 of Chanute, passed away on Saturday, April 4, 2020 at his home. Charles was born on December 21, 1937 in Avon, IL the son of Everette Griffith and Alice Evelyn (Johnson) Carpenter. After high school on July 20, 1958 in Avon, IL, Charles married Sharon Kepler. Charles and Sharon have been married for 61 years. Charles was a graduate of Western IL University, and worked as a Development Engineer for HBD Industries in Chanute. Charles was a member of the Chanute First United Methodist Church, and the Chanute Bass Club. He was also a member of the Avon Masonic Lodge where he joined in March of 1965. Including hunting and fishing, Charles enjoyed being a cast member of the Chanute Community Theater and singing in the choir. Most of all, Charles enjoyed spending time with his friends and family. Including his wife Sharon, Charles is survived by: 2 Sons: Michael Carpenter and wife Debbie of Stilwell, KS Mark Carpenter of Prairie Village, KS 1 Daughter: Michelle Roberts of Spring Hill, KS Sister: Karen Douglass and husband Hollister of Avon, IL 4 Grandchildren: Andrew (Liza) Roberts, David and Matthew Carpenter, Caitlin (Zach) Kremer 1 Great Grandchild: Olivia Kremer Charles was preceded in death by his parents and Son-In-Law Larry D. “Ench” Roberts Due to the Covid 19 situation a memorial service will be held at a later date. Charles will be returned back to his home in Avon, IL for burial. The family suggests memorials to the Chanute Community Theater and they may be left with or mailed to the funeral home. Online condolences may be left at: www.countrysidefh.com Services entrusted to: Countryside Funeral Home 101 N. Highland Chanute, KS 66720

The family of Charles Howard Carpenter created this Life Tributes page to make it easy to share your memories.

Send flowers to the Carpenter family.