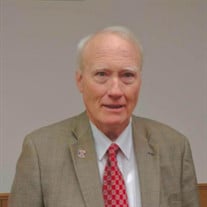 Charles H. Wilson, a former resident of Moline, Kansas, passed away while on business Thursday, February 24, 2022 in Wakeeney, Kansas. He was born in Winfield, Kansas on November 14, 1948 to Charles Lawrence and Estel (Hedde) Wilson. Charles grew up on the family farm west of Moline. He attended Moline Public Schools and the Methodist Church as a child. He enjoyed all things good country boys enjoy, fishing, hunting, baseball and basketball. He graduated from Moline High School, Class of ’66 and later attended Independence Community College and Wichita State University. He was married to Lucy Christian for 22 years, they were later divorced. Together they raised two daughters, Wendy and Lori. While in Wichita, Charles worked at Learjet for many years. Most recently he lived in Ark City, Kansas but worked statewide as a landman in real estate. Though he traveled much for work, Charles remained a devoted member to the Lincoln Baptist Church and was a proud member and State Officer of Recruitment for the Sons of Confederate Veterans. Charles was preceded in death by his parents, Lawrence and Estel. He is survived by: His daughters Lori (Jason) Morton of Derby, Kansas Wendy (Bob) Wilgers of Hesston, Kansas Grandchildren Lane, Avery, Ella Ruby, Brody, Courtney, Kayla, Adam and Aubrey Siblings Margaret Phillips Frank (Karen) Wilson Two Great-Grandchildren and nieces and nephews. Graveside services will be held for Charles on Saturday, March 5, at Moline City Cemetery at 11:00 am. In lieu of flowers, memorial bequests have been suggested to the Lincoln Baptist Church in Wichita, KS and can be left with or mailed to the funeral home. Online condolences can be left at www.countrysidefh.com. Services entrusted to Countryside Funeral Home, 206 E. Washington, P.O. Box 1233, Howard, KS 67349.

Charles H. Wilson, a former resident of Moline, Kansas, passed away while on business Thursday, February 24, 2022 in Wakeeney, Kansas. He was born in Winfield, Kansas on November 14, 1948 to Charles Lawrence and Estel (Hedde) Wilson. Charles... View Obituary & Service Information

The family of Charles H Wilson created this Life Tributes page to make it easy to share your memories.

Send flowers to the Wilson family.