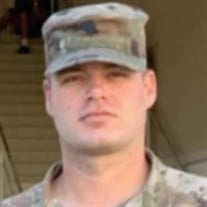 CJ Madison, age 29 of Howard, KS, passed away unexpectedly on December 29, 2020, in Rose Hill, KS. CJ was born December 31, 1990, in Emporia, KS to James and Donna (Jorgensen) Madison. He was raised in Howard, KS alongside his brother, Marc. He graduated from West Elk High School in the class of 2009. CJ started playing sports when he was just 4 years old, and it became an important part of his life. Throughout high school, he was active in track, basketball, wrestling, and football. He was the quarterback for his high school football team starting his freshmen year and continued through his senior year. After graduating high school, CJ attended Hutch Junior College, then WSU, and finished his business degree at Fort Hays State. After college, he coached football at several different schools including Ellsworth Community College in Iowa Falls, Iowa, Moscow High School KS, Hutch Junior College, and Northeastern State University in Tahlequah, OK, before deciding to enlist in the United States Army in March 2020. He had been stationed in Fort Benning, GA, and was getting ready to report to Fort Campbell in just a few days. He was excited about the next chapter in his Army life. CJ loved his family and friends and will be missed by all that knew him. CJ is survived by his parents: James Madison of Rose Hill, KS Donna Madison of Howard, KS Brother, Marc Madison and fiancé Jeri Smith of Bartlesville, OK Grandmothers: Carol Brooks of Haysville, KS Karen Rogers of Osage City, KS Numerous aunts, uncles, cousins, and countless friends He was preceded in death by his grandfathers, L.C. Brooks, and Joe Rogers, and his great-grandparents, Olin and Beatty Barrows, and Carl and Florence Jorgensen. Memorial service for CJ will be held on Saturday, January 16, 2021, at 11:00 am at Countryside Funeral Home, Howard, KS Inurnment will be in Grace Lawn Cemetery, Howard, KS Memorial contributions can be made to the American Legion Carter-Rader #0149 and can be mailed to or left with the funeral home. Services have been entrusted to: Countryside Funeral Home, 206 E. Washington, PO Box 1233, Howard, KS 67349

CJ Madison, age 29 of Howard, KS, passed away unexpectedly on December 29, 2020, in Rose Hill, KS. CJ was born December 31, 1990, in Emporia, KS to James and Donna (Jorgensen) Madison. He was raised in Howard, KS alongside his brother, Marc.... View Obituary & Service Information

The family of CJ Madison created this Life Tributes page to make it easy to share your memories.

CJ Madison, age 29 of Howard, KS, passed away unexpectedly on...

Send flowers to the Madison family.