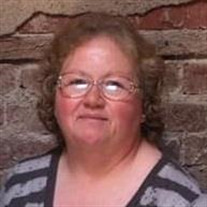 Clara I. Cunningham, 64, of Iola passed away on March 1, 2020. Clara was born on September 27, 1955 in Iola, KS the daughter of Floyd Thomas and Mabel Laverne (Miner) Boler. After high school Clara attended Allen County Community College. She worked 29 years in advertising for the Iola Register and then an additional 12 years at the Iola WalMart. Clara was a member and local and district officer of the Elsmore Ruritan Club and a member of the Town and Country Friends Club. On May 12, 1975, Clara married David Lee Cunningham and they were married for 30 years until their divorce in 2005. Clara enjoyed meeting people and being with her friends and she especially enjoyed being with her family. Clara is survived by: Son: Joshua D. Cunningham of Iola, KS Daughter Nicki A. Gossett of Iola, KS Brother: Larry and wife Anna Boler of Pittsburg, KS Sisters: Hellen Welch of Elsmore, KS Shirley Dinkins and Frank Patitucci of Pleasanton, CA Sharon Kay Brower and Ron of Farlington, KS Betty Hawley and George of Elsmore, KS Alice Bolin of LaHarpe, KS 2 Grandchildren: Kenleigh and Marlee Westhoff of Iola, KS Numerous nieces, nephews and great nieces and nephews. Clara was preceded in death by her parents, 2 brothers: Floyd Boler and Earl Miner and son-in-law Judd Gossett. Cremation has been requested with no services currently planned. The family will host a private burial at a later date. Online condolences may be left at: www.countrysidefh.com. Memorials have been suggested to the Elsmore Ruritan and may be mailed to P.O. Box 114, Iola, KS 66749. Services have been entrusted to: Countryside Funeral Home 420 S. 20th St., P.O. Box 247, Fredonia, KS 66736

The family of Clara I. Cunningham created this Life Tributes page to make it easy to share your memories.

Send flowers to the Cunningham family.