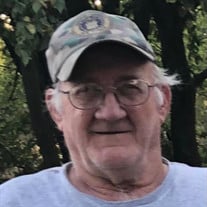 Clarence “Gene” McCarty, age 72 of Fredonia, KS, passed away October 6, 2020 at Kansas Medical Center in Andover, KS. Gene was born February 2, 1948 in Neodesha, KS to Clarence and Lola (Speaks) McCarty. He was raised in Wilson County alongside 3 sisters, Wanda, Lois, and Freda, and attended schools in Altoona. Gene was a welder and pipe fitter by trade, and traveled around the country for work. He then went to work for and retired from MEC. In his spare time, he liked to fish for catfish. One of his favorite things to do was ride around in the country with his son, and just talk. He was a great guy that would do anything for anybody. He will be greatly missed by all that knew him. Gene is survived by his wife of 21 years, Sally Folk Children: Mike Smith of Fredonia, KS Kacy McCarty of Frankfort, IN Regina McCarty of Severy, KS Travis McCarty of NM Andrea West of Frankfort, IN Numerous grandchildren and great-grandchildren Several nieces and nephews He was preceded in death by his parents, sister Wanda, and daughter Jeanna. Cremation has been requested. A graveside service will take place at Mt. Zion Cemetery in rural Greenwood County on Monday, October 12, 2020 at 11:00 am. Services entrusted to: Countryside Funeral Home, 420 S. 20th, PO Box 247, Fredonia, KS 66736

The family of Clarence "Gene" McCarty created this Life Tributes page to make it easy to share your memories.

Send flowers to the McCarty family.