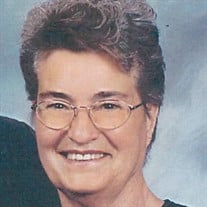 Cleo Evelyn Summervill age 86, of Chanute passed away Tuesday, October 6, 2020 at her daughter’s home. Cleo was born on February 8, 1934 in Jetmore, KS the daughter of Frank and Hazel (Griffin) Kittle. Cleo was a graduate of Cimarron High School. On December 31, 1952 she married Arnold Summervill. Cleo and Arnold were married in Long Beach, Calif., for almost 58 years until his death of November 24, 2010. Cleo was a member of the Big Creek United Methodist Church, and she was very active in the community. She served 2 terms on the Chanute School Board as President, a member of the PTA, and was an instructor for the local 4-H. Cleo was a seamstress, and loved making quilts and other items for family and friends. While raising her children, she also enjoyed working in her garden, cooking and flowers. Cleo and Arnold spent many years square dancing and she also volunteered at the Hospital Gift Shop. Most importantly, she loved her family immensely and enjoyed watching her grandchildren grow. Cleo is survived by: Children: Michael Summervill and wife Pat of Chanute, KS Gloria Ruggles and husband Kendal of Chanute, KS Linda Summervill of Wichita, KS Evelyn Jones and husband Carl of Chanute, KS Siblings: Martha Sapp of Canada Bob Kittle of Lebanon, IL Marilyn Russell of Saucier, MS 7 Grandchildren, 2 Step Grandchildren, 10 Great Grandchildren and 3 Great-Great Grandchildren Cleo was preceded in death by her parents, husband Arnold. Son Kerry Summervill, grandson Christopher Ruggles, Brothers Bill and Glenn Kittle and Sister Helen Wallace Funeral Services will be held on Monday, October 12, 2020 at 10:30 AM at the Big Creek UMC east of Chanute. Due to Covid-19 restrictions inside seating is limited, with outside seating available. Burial will follow at Memorial Park Cemetery in Chanute. Visitation will be held Sunday, October 11, 2020 from 4-6 PM at the funeral home. Memorials have been suggested to the Chanute USD 413 Foundation and may be left with or mailed to the funeral home. Online condolences may be left at www.countrysidefh.com. Services entrusted to: Countryside Funeral Home 101 N. Highland, Chanute, KS 66720

Cleo Evelyn Summervill age 86, of Chanute passed away Tuesday, October 6, 2020 at her daughter&#8217;s home. Cleo was born on February 8, 1934 in Jetmore, KS the daughter of Frank and Hazel (Griffin) Kittle. Cleo was a graduate of Cimarron... View Obituary & Service Information

The family of Cleo Evelyn Summervill created this Life Tributes page to make it easy to share your memories.

Send flowers to the Summervill family.