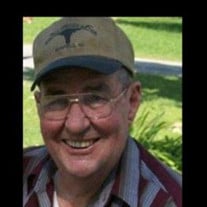 Curtis E Morgan, age 88 of Howard, KS passed away October 13, 2021 at Eureka Nursing Center in Eureka, KS. Curt was born July 12, 1933, in rural Howard, to Elias and Hazel (Story) Morgan. He attended Fiat grade school and graduated from Howard High School in 1951. On December 21, 1952, Curt married Anita "Louise" Hinkle. To this union were born 4 children, Jennifer, Jeffery, Jeanette and Jerald. They were married 57 years, until her passing in 2009. Curt owned Brown Feed Store and was a truck driver until retiring in 1998. He spent many years active in the Howard community, serving on the City Council, was Mayor of Howard for a time, and volunteered for many years on the Howard City Fire Department. After retiring he enjoyed doing odd jobs, woodworking, traveling, coffee at Toots, fishing, hunting and watching baseball on tv. Curt is survived by his son Jerald (Barbi) Morgan of Howard,KS and daughter Jennifer Harrod of Crete,NE, sister Virginia Tompkins of Scottsdale,AZ, 4 grandchildren, 8 great grandchildren, 5 great great grandchildren. He was preceded in death by his wife Louise, son Jeffery, daughter Jeanette, his parents Elias and Hazel, sister Jean Webster, and brother Carl Morgan. Funeral service will be held at 10:00 AM on Monday, October 18, 2021 at Countryside Funeral Home in Howard, KS Interment will follow in Grace Lawn Cemetery in Howard Memorial contributions can be made to the Howard City Fire Department or Harry Hynes Hospice and can be left with or mailed to the funeral home. Services entrusted to: Countryside Funeral Home, 206 E. Washington, PO Box 1233, Howard, KS 67349

The family of Curtis Everett Morgan created this Life Tributes page to make it easy to share your memories.

Send flowers to the Morgan family.