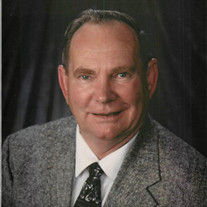 Dale Eugene Myers, 87, passed away peacefully at home, with his family present, in Carthage, MO, on New Year’s Eve, December 31, 2020. Dale was born March 21, 1933 in Chanute, KS, the son of Milo John Myers, and Woneta Belle (Holtzclaw) Myers. Dale grew up on the family farm west of Chanute where he attended Vilas High School, class of 1950, and played varsity basketball. For many years he helped organize the Vilas High School annual reunions, often serving in the role of Master of Ceremonies. Dale graduated from Chanute Jr. College in 1952. He married Natalie, his wife of 67 years, in February, 1953. He was then drafted into the United States Army in May, 1953. Possessing exceptionally fast typing skills, he served as clerk typist in Fort Bragg, NC, for two years during the Korean War, and was honorably discharged in May of 1955. After Dale’s discharge he turned his attention to education. In 1959 Dale earned a Bachelor’s Degree in Electrical Engineering from Kansas State University. Subsequently, he earned a Master’s Degree in Mathematics from the University of Tulsa in 1965. This education, along with many hours of special training in various computer languages, prepared him for a career in aviation and aerospace. From 1959 to 1962, Dale worked for American Airlines in Tulsa, the aircraft maintenance headquarters. As a Design Engineer, he was responsible for electronic, hydraulic, and pneumatic test equipment and instrumentation used for testing aircraft components. In June, 1962, Dale joined North American Rockwell Corporation and helped further our country’s effort to compete in the space race. He spent 16 months in Los Angeles developing design requirements for equipment required to launch the Apollo spacecraft. He led an electrical design group to design fuel-handling equipment to safely pump highly combustible fuel into the Apollo 8 fuel tanks. He later designed an extremely sensitive fuel flow measuring system to pump fuel on board the Lunar Excursion Module (LEM), which landed on the moon. This required moving the family to Florida in 1966 while he worked at Cape Kennedy, providing electrical support for the equipment he designed. Dale returned to Tulsa in 1967 after the launch of Apollo 8, and was assigned to a special project to do computer aided circuit analysis on the guidance system of the Minute Man Missile. Dale returned to American Airlines in 1969 and a year later became Manager of Test Equipment Engineering with additional responsibility for all aircraft maintenance standards labs. He managed these departments from 1970 until his retirement in 1990. Dale and Natalie (Petty) were married in Chanute, Kansas on February 13, 1953. Dale is survived by his wife, Natalie of Carthage, MO; son, Duane of Carthage, MO; daughter, Terri (Tom) Myers Prusator of Afton, OK; daughter Lynette (Dan) Myers Brown of Henryetta, OK; grandchildren Danielle and Paige Myers, Ashley Prusator Henson and Michael Prusator, Brenden, Weston, and Jeremy Brown; and great-grandchildren, Thomas, Natalie, Viviann, Bear, and Lily. Dale was preceded in death by his parents, Milo and Woneta (Holtzclaw) Myers, and son, Larry Dale Myers. Dale’s favorite activities were computers, grandchildren, fishing, more computers. Funeral services will be held on Friday, January 8, 2021 at 2:00 pm at Countryside Funeral Home, visitation will be held from 12:30 until service time. Memorials have been suggested to the Lewy Body Dementia Resource Center and may be left with or mailed to the funeral home. Online condolence may be left at: www.countrysidefh.com. Services under the direction of Countryside Funeral Home 101 N. Highland, Chanute, KS 66720 Masks will be available for those attending services.

The family of Dale Eugene Myers created this Life Tributes page to make it easy to share your memories.

Dale Eugene Myers, 87, passed away peacefully at home, with his...

Send flowers to the Myers family.