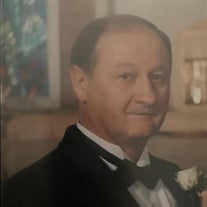 On February 20, 2022, David Leroy Cooper of Chanute, KS, passed away at Medicalodges in Independence, KS at age 77. David was the son of Harold Leroy Cooper and Nova Lucille (Weaver) Cooper, born on January 7, 1945. On July 17, 1965, David went on to marry the love of his life, Wanda (Masters) Cooper at the Grace Episcopal Church in Chanute, KS. He loved sports and the community so much that he coached baseball and softball for many years, was a member of a local bowling and pool league where he helped qualify for nationals. David was a season ticket holder for the Kansas City Chiefs for over 30 years, and thoroughly enjoyed watching the Kansas City Royals, Kansas Jayhawks, NASCAR Racing, and spending time at the Humboldt Speedway. He also enjoyed the peacefulness of hunting, fishing, golfing and spending time with his cats, Mickey Mouse and Butter Bean, whom he loved dearly. David went into the Army and served from January 18, 1966 to January 19, 1968. At the time of his honorable discharge, he had been honored with the Combat Infantry Badge, Bronze Star, Vietnamese Gallantry Cross with Silver Star, Army Accommodation Medal with Valor. He served in Fort Hood, Texas, Vietnam, and Fort Sill, Oklahoma. He served with the Blue Spaders with the Big Red One. David was an M-60 machine gunner in the jungles of Vietnam. He was proud to have served under Alexander Haig who was a Four-Star General at the time while in Vietnam. David was a Buck O’Neil Legacy Seat 2010 Honoree at a Kansas City Royals game. David was awarded the Quilt of Valor to honor service members and Veterans who have been touched by war; with comfort and healing. The quilt is an expression of gratitude meant to say “Thank you” and comfort you. He was awarded the Quilt of Valor on December 11, 2020 by The Town Hall Quilters. He is survived by his one true love, Wanda Lou, children Daniel David Cooper (Chanute, KS) and Timothy J Cooper (Emporia, KS). Six Grandchildren Amy Ashton Cooper and her friend Lucas O’Conner (Chanute, KS), Griffin Ty Cooper and his fiancé Kaitlyn Grace Newton (Lawrence, KS), Faith Danielle Cooper (Chanute, KS), Cass Paul Bledsoe and his wife Brittany (Wichita, KS), Seth Ryan Cooper (Emporia, KS), Karah Jo Cooper (Emporia, KS), and four great-grandchildren. David was preceded in death by his parents, infant son Steven Ray Cooper and his daughter Amy Carolyn Cooper. David is loved by the love of his life, Wanda, his sons, grandchildren, family, extended family and many friends. He will be greatly missed. Visitation will be held on Friday, March 11, 2022 from 6:00 pm to 8:00 pm at the Church of the Nazarene in Chanute. Funeral service will be held on Saturday, March, 12, 2022 at 10:00 am at the Church of the Nazarene with burial to follow at Memorial Park Cemetery in Chanute. Masks will be available at the church. Memorials have been suggested to ACARF or the Church of the Nazarene and may be left with or mailed to the funeral home. Online condolences may be left at: www.countrysidefh.com. Services entrusted to Countryside Funeral Home 101 N. Highland, Chanute, KS 66720.

On February 20, 2022, David Leroy Cooper of Chanute, KS, passed away at Medicalodges in Independence, KS at age 77. David was the son of Harold Leroy Cooper and Nova Lucille (Weaver) Cooper, born on January 7, 1945. On July 17, 1965, David... View Obituary & Service Information

The family of David Leroy Cooper created this Life Tributes page to make it easy to share your memories.

Send flowers to the Cooper family.