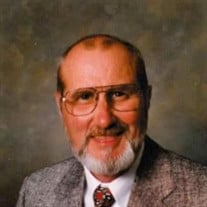 Dean W. Daniels, 82, of Cleveland passed away Sunday, March 28, 2021 at his residence after battling cancer. Mass of Christian Burial will be held at Our Lady of Victories Catholic Church in Cleveland, MS on Wednesday, March 31, 2021 at 10:30 a.m. Burial will be held at St. Patrick cemetery in Chanute, Kansas. Dean was born on December 9, 1938 to Wallace and Lola Daniels. He graduated from Chanute Junior College and the University of Kansas. On June 23, 1962 he married Barbara (Babs) Koenig. In 1967, they moved to Cleveland and he began work at Simmons Belk and later became a partner. After James Simmons retired, Dean opened K & D associates with Kenneth Dawson. Later he sold this business to Fred and Susan Cathcart, owners of Valley View Agriculture. He fully retired in 2015. Dean was elected to the National Board of Directors for American Society of Agricultural Consultants. He served on the advisory board of Merchant & Farmers Bank. He was a member of Our Lady of Victories Catholic Church, where he served on the finance committee and pastoral council. He is preceded in death by his wife of 49 years, Babs Daniels; and his parents, Wallace Daniels and Lola Daniels Giertz. He is survived by his two daughters, Tempa Fleming (Hal) and Kendell Roberts (Brad); his three grandchildren, Caleb Worsham (Kelsi), Trevor Worsham (Emily), and Griffith Roberts; and one great grandchild, McKena Worsham. He was cared for by four guardian angels, Ruth Ann Bailey, Diane Fly, Carolyn Jones, and Paula Lambert. Honorary Pallbearers will be Pearman Smith, Bobby Sheedy, Ed Coleman, H.L. Dilworth, Bob Eley, John Denton, and Joe Smith. In Lieu of flowers, memorials can be made to St. Jude Children’s Hospital, Our Lady of Victories building fund, or to charity of your choice.

Dean W. Daniels, 82, of Cleveland passed away Sunday, March 28, 2021 at his residence after battling cancer. Mass of Christian Burial will be held at Our Lady of Victories Catholic Church in Cleveland, MS on Wednesday, March 31, 2021 at 10:30... View Obituary & Service Information

Send flowers to the Danials family.