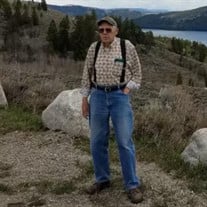 Delbert Steve “Del” Hobbs, 84, and a former resident of Buffalo, KS passed away on Monday, January 24, 2022 at Meadow Wind Assisted Living in Casper, WY. Delbert was born on April 2nd, 1937 to Charlie Bennett Hobbs and Sylvia Maxine (Purdy) Johnson in Fredonia, KS. On August 9, 1954, he married Betty June Eagle and they enjoyed 63 years of marriage until her death in 2017. They split their 63 years between Kansas and Wyoming, spending time with their family and enjoying each other. Delbert is survived by Sons: Michael G. Hobbs and wife Diane of Upton, WY, Randy D. Hobbs and wife Beverly of Casper, WY, Danny R. Hobbs and wife Terri of Casper, WY, Jeffrey A. Hobbs and wife Debbie of Labarge, WY, 8 Grandchildren, and 13 Great Grandchildren. He was preceded in death by his parents and wife, Betty. Cremation has been requested. Services will be determined at a later date. Services entrusted to Countryside Funeral Home, 420 S. 20th St. P.O. Box 247, Fredonia, KS 66736.

The family of Delbert Steve Hobbs created this Life Tributes page to make it easy to share your memories.

Delbert Steve “Del” Hobbs, 84, and a former resident of Buffalo,...

Send flowers to the Hobbs family.