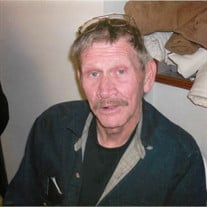 Dennis M. Dewey, 81, a longtime resident of Chanute, died Thursday, May 6, 2021 at his sister's home in Galesburg. He was born May 12, 1939, at Burlington, Kansas, to June H. (Lawrence) and Lawrence W. Dewey. He attended elementary and high school in Burlington. After high school he worked various jobs in Burlington. Dennis married Joyce Metzler and they had three sons. He served two years in the US Army where he was stationed in Germany. After returning from the military, he worked for the State Highway Department. He and Joyce were later divorced. He then moved to Chanute, where he married Janis Smith and they later divorced. He worked in a factory for several years, then as an industrial painter, operated a tavern, and then for the last several years worked for SKIL, an agency that provides transportation to persons no longer able to drive themselves. That job gave him the ability to help other people which he truly enjoyed. Dennis was an avid reader, loved all kinds of music, and kept up with local and national events. He was full of humor, and dearly loved his cat, Anne, who preceded him in death. Survivors include three sons, Jack McCarty (Yvonne) of Neosho, Missouri, Evan Dewey (Kellie) of Mounds, Oklahoma, and Shannin McCarty of Wichita; 5 grandchildren and 7 great-grandchildren; two sisters, Christine Mayfield (Paige) of Galesburg, and Kathryn Gill of Wichita, and one brother, Britton White (LouAnn) of Galesburg. He is preceded in death by his parents and step-father. The service will be at 2 p.m. Wednesday, May 12 at Countryside Funeral Home, 101 N. Highland in Chanute. Burial will be in Graceland Cemetery in Burlington. Memorials are suggested to the Chanute Humane Society and may be left at or mailed to the funeral home at 101 N. Highland, Chanute, KS 66720.

Dennis M. Dewey, 81, a longtime resident of Chanute, died Thursday, May 6, 2021 at his sister's home in Galesburg. He was born May 12, 1939, at Burlington, Kansas, to June H. (Lawrence) and Lawrence W. Dewey. He attended elementary and high... View Obituary & Service Information

The family of Dennis Marc Dewey created this Life Tributes page to make it easy to share your memories.

Send flowers to the Dewey family.