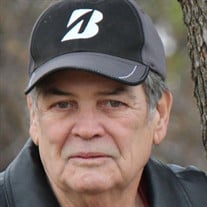 Dennis Allen Dougan drifted off to sleep for the last time on Monday, August 24, 2020 around 1 p.m. completely on his own terms, in the privacy of his own home, under the watchful eye of his wife and daughters. He was born March 4th. 1948 in Spring Hill, Kansas to Vernon Mack Dougan and Lorene Wynona (Moore) Dougan. He was the youngest of their 4 children. He attended Spring Hill schools and graduated in 1966. In 1968, he was drafted into the US Army and received his Basic Training at Ft. Leonard Wood, Missouri, before serving in Vietnam. He finished his tour in 1970 and returned home to Spring Hill. He soon met the love of his life, proposing to her Christmas of 1970 and marrying Pamela Jean Weston on July 24th, 1971. She survives, of the home, and remains his Forever Love caring for him through his final moments on Earth. During their 49 years of wedded bliss they welcomed two daughters, Lisa Dougan Collins, wife of Jim, and Jacqueline Dougan. They moved to Chanute in 1972. Where he worked installing automotive glass for 37 years, starting at Glass Specialty System and finally retiring from PGI Inc. September 30, 2007. He and Pam purchased farm land in 1988 with his brother, Dan and his late wife, Joy. The two couples farmed several acres and raised many head of cattle East of town for nearly 12 years. He became a member of the Cedar Lodge #103, and served as Master in 1999. His Masonic brothers were a huge part of his life. He was also a member of the American Legion. He enjoyed hunting and fishing with friends and family, as well as playing cards and card games with them. The last few years his favorite activity has been riding ATV's in Colorado with numerous friends and family. Passing the love of the great outdoors on to his grandchildren. He is survived by one brother, Daniel Dougan (Barbara) in Bogue, Kansas. An Aunt, Frances McConnell, Independence, Missouri, his two daughters, three grandchildren, Ashley, Allen and Abby Craig, several nieces and nephews and lots of extended family. He cherished his time with family and was always an instigator of orneriness with the youngsters. He adored his grandchildren, and was quick to teach them the newest card games he was playing. He was preceded in death by his parents, a brother, Dale Dougan, a sister, Deanna Dougan, and his sister in law, Joy Dougan. A self-proclaimed grumpy ol' man, he was always loved and will be missed by many. Cremation has been requested and the family will be holding a celebration of life at a later date. Memorials can be made to the ALS Association.

Dennis Allen Dougan drifted off to sleep for the last time on Monday, August 24, 2020 around 1 p.m. completely on his own terms, in the privacy of his own home, under the watchful eye of his wife and daughters. He was born March 4th. 1948 in... View Obituary & Service Information

The family of Dennis Allen Dougan created this Life Tributes page to make it easy to share your memories.

Dennis Allen Dougan drifted off to sleep for the last time on...

Send flowers to the Dougan family.