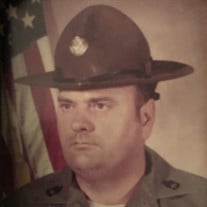 Donald Ray Cannon, age 80, of Chanute, KS, passed away on Tuesday, March 3, 2020 in Wichita, KS. Don was born on June 29, 1939 in Neodesha, KS, the son of Milo and Phoebe (Moulton) Cannon. He married Ute Landherr on February 6, 1959 and they celebrated 61 years of marriage. She survives him at the home. Don served in the United States Army from 1958-1976 and retired as a Sgt. First Class. He enjoyed hunting, fishing and dancing. He most of all enjoyed spending time with his family, especially his grandchildren and great grandchildren. Don was a member of the Lion’s Club, VFW and American Legion. Don will be greatly missed. Don is survived by Wife: Ute Cannon Children: Dennis Cannon and daughter-in-law, Rita Darlene Barker Cannon Peggy Hufford and son-in-law, Gary Sister: Barbara Brock 11 Grandchildren 18 Great Grandchildren He was preceded in death by his parents and brothers, Ben, Bob, Joe and Henry Cannon. The family will greet friends and family on Monday, March 9, 2020 from 10 a.m. – 12 p.m. at Countryside Funeral Home 101 N. Highland, Chanute, KS. Funeral services will at 12 p.m. at the funeral home. Burial will follow in Mt. Pleasant Cemetery south of Fredonia, KS. Online condolences may be left at: www.countrysidefh.com. The family suggests memorials to be made to the Living Word Assembly and may be left with or mailed to the funeral home. Arrangements have been entrusted to Countryside Funeral Home, 101 N. Highland, Chanute, KS 66720.

The family of Donald Ray Cannon created this Life Tributes page to make it easy to share your memories.

Send flowers to the Cannon family.