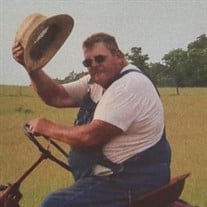 Donald Wayne Clarke died November 22, 2020 at his home at Yates Center, KS. He was 90 years old. Don was born February 8, 1930 at Horton, in Brown County, Kansas, the son of Benard Robert and Viola Marie (Merritt) Clarke. He graduated from Horton High School in the spring of 1950. He worked for the State Highway Department the summer of 1950, and served in the United States Navy from November 1950 to August 1954. He married Lola A. Kneisel on December 19, 1951 and had a good life for the next 53 years. There were three children born to this union, Thomas Wayne, Daniel Robert, and Rebecca Lynn, all born at Horton, Kansas. Don worked for the Continental Baking Company from the fall of 1954 to the spring of 1966. Then he took a position with the Kansas Forestry Fish and Game Commission as a State Game Protector for Woodson and Wilson Counties. He moved to Woodson County, Kansas in August of 1966, and retired from the Department of Wildlife and Parks on December 2, 1992. He then ran a few head of cattle for the next 19 years. Don was an avid hunter and liked guns and dogs. He was a member of the N.R.A., the American Legion, and a Senior Life member of the Kansas Peace Officers Association. He was preceded in death by his parents, wife Lola in 2004, and sister, Bernetta Schecher Don is survived by his children: Tom Clarke and wife Kathy of Springfield, MO Dan Clarke and wife Beth of Yates Center, KS Becky Splechter and husband Tom of Yates Center, KS Brother-In-Law, Chuck Schecher of Horton, KS 6 Grandchildren, 1 Great-Grandchild Many other relatives and friends Cremation has been requested, and inurnment will take place at a later date in Mt. Hope Cemetery at Hiawatha, KS. Memorial contributions can be made to the American Legion Post 13, and can be left with or mailed to the funeral home. Services entrusted to: Countryside Funeral Home, 101 N. Highland, Chanute, KS 66720

Donald Wayne Clarke died November 22, 2020 at his home at Yates Center, KS. He was 90 years old. Don was born February 8, 1930 at Horton, in Brown County, Kansas, the son of Benard Robert and Viola Marie (Merritt) Clarke. He graduated from... View Obituary & Service Information

The family of Donald Wayne Clarke created this Life Tributes page to make it easy to share your memories.

Send flowers to the Clarke family.