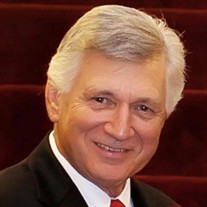 Donald Rex Crowell passed away peacefully at the age of 77 surrounded by his loving family on Tuesday, December 22, 2020. Rex was born September 4, 1943 the son of Charles and Anna Crowell. Rex attended Longton High School in Longton, Kansas. After he graduated high school in 1961, Rex attended Independence Community College and Emporia State University where he received his B.S.E Degree from Kansas Teachers College in Emporia in 1965. After graduation, Rex lived in California while working for Southwestern Bell. Rex went on to serve his country as a First Lieutenant for the United States Army in the Vietnam War. He was critically injured in the line of duty in Vietnam as an Assistant Battalion Advisor, 1st Battalion, 46th Regiment, 25th Infantry Division, Army of the Republic of Vietnam where he fought bravely in multiple battles against the enemy. His valor in battle on November 11th, 1967 against enemy forces in Can Douc, Vietnam earned Rex the Silver Star and the Bronze Star. His gallantry in action saved countless lives when being overran by enemy fighters. First Lieutenant Crowell led a punishing retaliation effort against the enemy which ultimately forced the enemy to retreat from their position. Rex was awarded the Purple Heart for being critically injured in combat. His other citations include National Defense Service Medal, The Vietnam Service Medal, Combat Infantryman Badge and the Vietnam Campaign Medal. His time spent in Vietnam sparked a love of languages in Rex and an appreciation of seeing the world. After recovering from his injuries, Rex traveled and learned several languages. While he enjoyed traveling, his heart and home were always in Longton, Kansas. After returning home, Rex held public office as a Representative for the State of Kansas from 1975 – 1994. During this time, he was appointed Chairman of the Transportation Committee and served on the Kansas Turnpike Authority Board for 12 years. While making a difference in the legislature, Rex also found time to receive his Law Degree from Washburn University. Rex raised his family in Longton, Kansas where he was a rancher, attorney, school psychologist and school board member. Next to spending quality time with his daughters and grandchildren, Rex enjoyed spending his free time working at his family farm where he grew up. Rex did many things throughout his lifetime, but what he was most proud of was being a loving father and grandfather. Rex was preceded in death by his parents and his siblings: Charles Crowell Jr. “Sandy”, Frank Crowell, Caryl Crowell, Kathryn Lozano “Kathy” and James Crowell “Jimmy”. Rex will be forever remembered by his five daughters from his marriage to Nancy Brogan Crowell; Shanda (Eric) Ortega of Kansas City, Missouri; Sarah (Matthew) Smith of Colorado Springs, Colorado; Ashley (Tom) Gilkey of Destin, Florida; Erin (Ryan) Scott of Elkhart, Kansas; and Natalie Crowell of Wichita, Kansas. He will also be lovingly remembered by his 11 grandchildren: Isabela Ortega, Mila Ortega, Charlotte Smith, Elizabeth Gilkey, Thomas Gilkey IV, Emily Gilkey, Stafford Gilkey, Brogan Scott, Liam Scott, Ashlyn Scott and Finnegan Scott; by his sister Beverly (Norman) Baker and by his sister-in laws Jean Crowell and Sharon Crowell. Rex will also be fondly remembered by his numerous nieces, nephews, extended family and dear friends. A celebration of Rex’s life will be held on Thursday, January 14, 2021 at 1pm in Longton, Kansas at the United Methodist Church. Immediately following, there will be a graveside service at the Longton Cemetery. A visitation will be held on Wednesday, January 13, 2021 from 4-6pm in Howard, Kansas at Countryside Funeral Home. For those who cannot attend, a video will be available online at www.countrysidefh.com following the services. A memorial has been set-up for the Disabled American Veterans, and can be mailed to or left with the funeral home. Services have been entrusted to: Countryside Funeral Home, 206 E. Washington, PO Box 1233, Howard, KS 67349

The family of Donald Rex Crowell created this Life Tributes page to make it easy to share your memories.

Donald Rex Crowell passed away peacefully at the age of 77 surrounded...

Send flowers to the Crowell family.