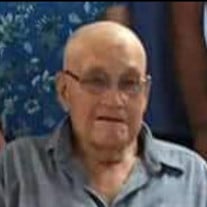 Donald Rhea Reinhart, passed away on June 30, 2021 at Montgomery Place in Independence, KS at the age of 93. Donald was born on July 28, 1927 in Fredonia to Raymond Thomas and Verna “Irene” (Dawson) Reinhart. His growing up years were spent in Coyville and later in Fredonia. He attended various schools within Wilson County. He entered the United States Navy on September 28, 1945. During his time of service while aboard the USS James M. Gillis Ship, he was a participant of “Operation Crossroads” to test the effect of the Atomic Bomb on naval vessels conducted at Bikini Atoll, Marshall Islands. He was honorably discharged on September 27, 1949. On February 4, 1947, he married the love of his life, Lola Conrad. To this union were born three children, Jane, Wayne and Anita. They were married 66 years until her death in November 2013. Donald was employed at the Fredonia water and power plants and retired after 40 years of service there. He enjoyed spending time with his family and friends. He was a hard-working man and enjoyed gardening. He sold many dozens of ears of sweet corn for many years. He enjoyed hunting and fishing in his younger years. He enjoyed playing his guitar and played for various dances as a young man. He was a member of the Fredonia United Methodist Church, VFW, and American Legion. His parents, wife Lola, granddaughter Kristen Reinhart, and grandson Justin Sumner preceded him in death. Survivors include one sister, Lois Myers McNett of Fredonia, KS Children: Jane (Eldon) McGinnis of Fredonia, KS Wayne (Candie) Reinhart of Neosho, MO Anita (Paul) Sumner of Topeka, KS 6 Grandchildren: David (Tammy) McGinnis, DeeAnn (Lance) Edens, Dana (Matt) Anderson, Eric (Brandi) Reinhart, Cindy Reinhart, and Jordan (Amanda) Sumner 10 Great-Grandchildren: Jarren Reinhart, Holly Green, Ariel McGinnis, Dylan McGinnis, Faith Lawrence, Maleeah Pugh, Quintin Reinhart, Cooper Anderson, Dannee Anderson and Noah Bacon 3 Great-Great-Grandchildren: Kynlee, Azariah, Kolt Funeral Services will be held at 11:00 AM on Wednesday, July 7, 2021 at Countryside Funeral Home, Fredonia, KS The family will receive friends at visitation from 10:00 to 11:00 AM prior to the service. Interment will take place in Fredonia City Cemetery following the service. Memorial contributions can be made to the Fredonia Flag Fund or the Avenue of Flags and can be mailed to or left with the funeral home. Services have been entrusted to: Countryside Funeral Home, 420 S. 20th, PO Box 247, Fredonia, KS 66736

The family of Donald Rhea Reinhart created this Life Tributes page to make it easy to share your memories.

Send flowers to the Reinhart family.