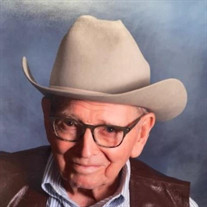 Donald “Don” Lee Robertson, age 87 and life-long resident of Fredonia, KS, passed away Friday, March 5, 2021 at his home. Don was born June 14, 1933 in Fredonia, KS to Jacob and Nina (Ward) Robertson. He was an only child and was very close to his grandparents who helped raise him. He learned later in life that he had 2 half-brothers, Butch and Robert, and 6 half-sisters, Debbie, Dorothy, Alice, Mary, Brenda, and Patty. He attended school in Fredonia and graduated from Fredonia High School in 1951. In 1955, Don enlisted in the United States Army, serving his country for 2 years, being stationed in Germany for part of his service. On January 10, 1976, Don married Doris Jean Reida in Fredonia, KS. They have spent 45 wonderful years together. Along with being parents and grandparents, Don and Jean loved to travel. They would take yearly trips that included vacations to Colorado, Niagara Falls, Hawaii, and some international travel to London, Scotland, Australia, Germany, and Paris. In all their travels, they even decided to take a cruise for their 25th wedding anniversary. Don loved being on the farm, and enjoyed raising cattle and dirt farming most of his life. He was also well known at the ADM plant in Fredonia as a Foreman, and retired in 1996 after working there for over 33 years. One of his passions was building guns, which he was quite good at, building several black powder rifles. Don was a Mason for many years, as well as a member of the VFW, Old Iron Club, and the United Methodist Church in Fredonia, where he sang in the choir and sang solos during services and for funerals for over 50 years. Don was a devoted husband, beloved father/step-father, and grandfather. He is survived by his wife Jean, 7 children, 24 grandchildren, and 23 great-grandchildren. Children Mark (Jennifer) Robertson of Emporia, KS Kenton (Shirlene) Robertson of Adelaide, Australia Cindy (Ernie) Primera of Surprise, AZ Sonya Floyd of Manhattan, KS Bryan (Mary) Robertson of Minot, ND Connie (Navid) Nikravan of Overland Park, KS Barbara (Mike) Yandell of Wichita, KS He was preceded in death by his mother, father, and grandparents. Don will be greatly missed by his family, friends and neighbors. A Memorial service for Don will be held on Saturday, March 13, 2021 at 1:00 pm at Countryside Funeral Home in Fredonia, KS The family will receive friends for visitation at the funeral home from 12:00 to 1:00 pm before the service. Memorial contributions can be made to the Fredonia Flag Fund or Old Iron Club and can be mailed to or left with the funeral home. Services entrusted to Countryside Funeral Home, 420 S. 20th, PO Box 247, Fredonia, KS 66736

The family of Donald "Don" Robertson created this Life Tributes page to make it easy to share your memories.

Send flowers to the Robertson family.