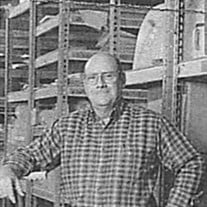 Not sure what to send?

Donald Eldon Warren, Jr., age 81 of Neodesha, Kansas, passed away at his home on May 5, 2022. Donald was born February 3, 1941 in Independence, Kansas to Donald Warren Sr. and Lyle (Heslop) Warren. He grew up in Independence alongside his brother Terry, graduating from Independence High School in the class of 1959. In 1964, Donald married Krin Hollingsworth. Together they had twin sons, Donnie and Ronnie. They later divorced. He then married Sue Williams, and gained 2 step-sons, David and Lamont. They were married until Sue’s passing in 1995. On June 14, 1996, Donald married Carolyn Maxwell, at one of their favorite spots at Elk City Lake. With this marriage, he gained another son, Ron into his life. Don and Carolyn have enjoyed the thrills of life, and their family together for the last 26 years. As a young man, Donald went to work for Rock Island Railroad in El Reno, OK. He retired from the railroad in the early 80’s and moved back to Kansas. He made his home in Neodesha and went to work for Cobalt Boats, retiring after 25 years, where he was known as the CEO of Non-Current Material. Donald loved people and loved to talk to anyone and everyone about anything. If you were having a bad day, he was able to make it better with just a little conversation. Donald loved the outdoors and animals. The entire family made it a yearly tradition to camp at Elk City Lake during Neewollah. He would have to make 2 or 3 trips home each day though, to check on his dogs. He also loved to play the drums, which was a life-long passion that started back in high school. In his younger years, he would play alongside the jukebox in clubs he would visit and even had a local band for a while. He kept it up and would play Wipeout on the drums at the Cobalt Christmas party every year. Above all else, Donald loved his family. He loved spending time with them, whether it was camping at the lake or conversations in the living room. He is survived by his wife, Carolyn of the home Sons: Don (Annette) Warren of Broken Arrow, OK Ronnie (Debbie) Warren of Tyler, TX Ron (Stephanie) Fyfe of Neodesha, KS Step-Sons: David Williams of Arizona Lamont Williams of Independence, KS Brother, Terry Warren (Ed Johnson) of Iola, KS Grandchildren: Scott (Lindsay) Warren of Lewisville, TX Kyle (Rayzel) Warren of Broken Arrow, OK Jessica Warren (Rich Martin) of Tyler, TX Kristen (Luke) Penny of Tyler, TX Keenan (Chelsea) Fyfe of Independence, KS Mac (Hayley) Fyfe of Independence, KS Rusty Williams of Independence, KS Great-Grandchildren: Penny, Riley, Knox, and 3 more on the way He was preceded in death by his parents, Don and Lyle Warren, and aunt, Agnes Dreher A memorial service will be held at 11:00 AM on Saturday, May 21, 2022, at Grace Baptist Church in Neodesha, KS In lieu of flowers, the family suggests memorial contributions be made to Harry Hynes Hospice, AWOL of Independence, or Fredonia Pound Pals, and can be mailed to or left with the funeral home. Services entrusted to Countryside Funeral Home, 420 S. 20th, PO Box 247, Fredonia, KS 66736

Donald Eldon Warren, Jr., age 81 of Neodesha, Kansas, passed away at his home on May 5, 2022. Donald was born February 3, 1941 in Independence, Kansas to Donald Warren Sr. and Lyle (Heslop) Warren. He grew up in Independence alongside his... View Obituary & Service Information

The family of Donald Eldon Warren Jr. created this Life Tributes page to make it easy to share your memories.