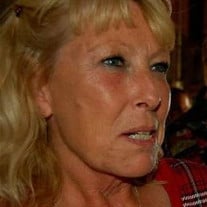 Dorinda "Denny" Kae Mason age 69 of Fredonia, died Sunday, July 21, 2019 at Heritage Health Care in Chanute. Denny was born on May 15, 1950 in Fredonia the daughter of Charles "Tuffy" and Lou (Myers) Marshall. Denny worked as a retail clerk for many years then became a CNA. She loved being outdoors, she loved working in her garden and always having big flower beds. She enjoyed going fishing when she could and spending time with family and friends. In November of 1971, Denny married Joe Weatherby, to this union they had 3 children Joe, Brent and Miranda, they later divorced in 1983, Denny then married Lonnie Mason and they had Terry, then later divorced. Denny is survived by: 4 Children: Joe Weatherby of Fredonia, KS Brent Weatherby and wife Shanda of Fredonia, KS Miranda Weatherby of Fredonia, KS Terry Mason and wife Kaylee of Fredonia, KS Mother: Lou Marshall of Fredonia, KS Sisters: Roxie Marrs and husband Holden of Claremore, OK Kim Messer and husband Rick of Montreal, MO 8 Grandchildren Denny was preceded in death by her father Tuffy Marshall. Cremation has been requested with a memorial service to be held on Friday, August 9, 2019 at 2:00 PM at Countryside Funeral Home in Fredonia. Memorials have been suggested to the Fredonia Pound Pals and may be left with or mailed to the funeral home. Online condolences may be left at: www.countrysidefh.com Services entrusted to: Countryside Funeral Home 420 S. 20th St., P.O. Box 247, Fredonia, KS 66736

The family of Dorinda "Denny" Kae Mason created this Life Tributes page to make it easy to share your memories.

Send flowers to the Mason family.