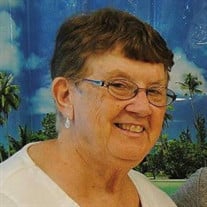 Doris “Doy” June Anderson, age 81 of Chanute, passed away on Sunday, June 7, 2020 at Neosho Memorial Hospital. Doris was born on January 25, 1939 in Chanute, KS the daughter of Elbert E. and Goldie M. (Roberts) Ellison. Doris was a graduate of Chanute High School class of 1957. On September 21, 1958 she married Gene Larry Anderson, Doris and Gene were married for 51 years until his death of April 11, 2010. Doris was a member of the Chanute Church of the Nazarene; she had worked for Jostens Books until her retirement. Doris enjoyed traveling and camping with her husband as they were snowbirds for several years. She enjoyed collecting unique items and was well prepared. Most of all, Doris enjoyed supporting her family at sporting events, as her family was her life. Doris is survived by: Son: David B. Anderson and wife Lori of Columbia, MO Daughter: Brenda J. Cope and Brent Barker of Chanute, KS Brothers: Fred Ellison and wife Sherry of Claremore, OK Bob Ellison of Chanute, KS Sisters: Rosemary Jackett of Chanute, KS Joyce Alexander and husband Fred of Chanute, KS 4 Grandchildren: Kayla Haid and husband Matt, Taylor Huffman, Kaitie Huffman, David Huffman Jr. 3 Great Grandchildren: Rylan and Bryson Haid and Alessandro Bonnanno Doris was preceded in death by her parents, husband Gene, Sister Beatrice Goodsell, Brother Larry Ellison and nephew James Jackett. Funeral services will be held Wednesday, June 10, 2020 at the Chanute Church of the Nazarene at 10:00 AM. Visitation will be held on Tuesday, June 9, 2020 from 6-8 PM at the Chanute Church of the Nazarene. Online condolences may be left at: www.countrysidefh.com Memorials have been suggested to the Church of the Nazarene and may be left with or mailed to the funeral home. Services entrusted to Countryside Funeral Home 101 N. Highland, Chanute, KS 66720

The family of Doris "Doy" June Anderson created this Life Tributes page to make it easy to share your memories.