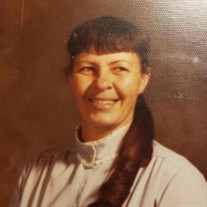 Doris Nadine Larsh, age 87 of Longton, KS, passed away on Sunday, January 9, 2022 at Windsor Place in Coffeyville, KS. Doris was born October 24, 1934 in Potwin, KS to Everett and Ethel (Walton) Mossman. She grew up alongside 4 siblings and graduated from El Dorado High School. Doris married David Ward, and they later divorced. They had one son, Terry. She later married Kenneth Larsh, and they later divorced. They had a daughter, Sherry and a son, Ritch. Doris decided that she was better single, which she remained from then on. In the early 60’s, Doris and the family moved to Elk County, first calling Oak Valley home. They then moved to Longton, 3 days before Christmas, and the kids were all excited about their newly found indoor plumbing! Doris was known to be a worker, whether it be at the Alfalfa Mill, Starcraft manufacturing in Independence, running the oil leases, or as an LPN. She was known to treat people in the Longton area, or take them to the doctor if needed. She also worked as an LPN at Twilight Manor nursing home in Howard, and was a rural mail carrier for several years. Doris is survived by her children: Terry Ward and wife Penny of Houston, TX Sherry Larsh of Independence, KS Ritch Larsh and wife Kim of Owasso, OK 10 grandchildren and 14 great-grandchildren Sisters: Ruth Dozier of Dearing, KS Geneva Duke of Independence, KS She was preceded in death by her parents, brother Al, and sister Darlene Doris will lay in state on Wednesday, January 12, 2022 from 1:00 to 4:00 PM at Countryside Funeral Home in Howard, KS Graveside service will be held on Thursday, January 13, 2022 at 1:00 PM at McGill Cemetery, Potwin, KS Memorial contributions can be made to the Elk County Angel Tree and can be mailed to or left with the funeral home. Services entrusted to Countryside Funeral Home, 206 E. Washington, PO Box 1233, Howard, KS 67349

Doris Nadine Larsh, age 87 of Longton, KS, passed away on Sunday, January 9, 2022 at Windsor Place in Coffeyville, KS. Doris was born October 24, 1934 in Potwin, KS to Everett and Ethel (Walton) Mossman. She grew up alongside 4 siblings and... View Obituary & Service Information

The family of Doris Nadine Larsh created this Life Tributes page to make it easy to share your memories.

Send flowers to the Larsh family.