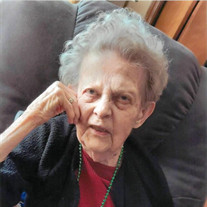 Doris Wilma (Alliston) Studebaker, age 98 of Fredonia, KS, passed away peacefully Sunday, August 8, 2021 at Morningstar Care Homes in Fredonia. Doris was born May 9, 1923 in Wichita, KS to Lyle and Evangeline (Hanshaw) Alliston. As a young child, the family lived in Greenwich, KS, but moved to a farm north of Fredonia in 1936 when Doris was 13 years old. She attended Grand Valley one-room school not far from the farm, and graduated from Fredonia High School in 1941. On February 18, 1943, Doris was united in marriage to Carl “Joe” Studebaker Jr. in Fredonia, KS. They were married 76 years until his passing in January 2020. Together they raised 4 children. They worked side by side on the farm for 39 years. When her youngest daughter started school Doris started her 24 year career with the Wilson County ASCS Office, retiring in 1981. Their favorite past-time when the work was done, was dancing. They were known to go to dances in Altoona, Independence, Parsons, Chanute, and Eureka. If there was music being played, you could bet Doris and Joe would be there dancing. Family was important to Doris. Even though there was always farm work to be done, she and Joe always made time to take family trips. Doris would buy picnic food before they left, and they would stop to eat wherever they found a good spot to have a family picnic along the way. Their trips were destinations from coast to coast and included Disney Land in 1961 and the New York World’s Fair in 1964, and several trips through the years to the Studebaker National Organization gathering in Ohio. They also attended cousin’s reunions across the USA, many times. After retiring, Doris didn’t slow down. She and Joe wintered in south Texas for 14 years. They enjoyed camping and belonging to Good Sam RV Club. She also took up playing pool, and was pretty serious about it. She would get into pool tournaments and had Joe add on to the garage so she could put a pool table in there for practice. In 2012, Doris and Joe moved to Madison Square in Fredonia, and in 2019 moved to Morningstar Care Homes in Fredonia. She was a member of the United Methodist Women, Fredonia Senior Center, NARFE, and was a Wilson County Conservation affiliate member. Doris was a loving mother, grandma, great-grandma and great-great-grandma. Family was precious to her and she loved spending time with them. She is survived by her children: Gyla McVey and husband Jim, Fredonia Karen Jones and husband Pete, Iola Carl Studebaker, Fredonia Nancy Timmons, Fredonia 8 Grandchildren, 21 Great-Grandchildren, and 6 Great-Great-Grandchildren Sister, Shirley and husband Bill Farmer of Golden City, MO. She was preceded in death by her parents, husband Joe and son-in-law, Doug Timmons. The family will receive friends at visitation on Friday, August 13, 2021 from 4:00 to 6:00 PM at Countryside Funeral Home in Fredonia, KS Funeral services will be held on Saturday, August 14, 2021 at 1:00 PM at the funeral home. Interment will follow in Fredonia City Cemetery Memorial contributions can be made to the Fredonia Senior Citizen Center and can be mailed to or left with the funeral home. Services entrusted to Countryside Funeral Home, 420 S. 20th, PO Box 247, Fredonia, KS 66736

The family of Doris Wilma Studebaker created this Life Tributes page to make it easy to share your memories.

Send flowers to the Studebaker family.