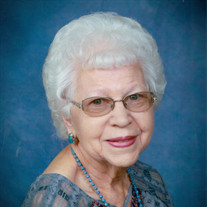 Mrs. Dorothy Mae (Larson) McCoy Beck died peacefully surrounded by loved ones at Country Place Senior Living in Chanute, KS on January 4, 2020 at the age of 83. She was born on her family's homestead on a hot, hot 117° summer day on August 8, 1936, in rural Chanute, KS to Harry and Hattie (Johnson) Larson. She was a lifelong resident of the Chanute area. She attended the Swede Center School during her early years of learning and graduated from Chanute High School in 1953. Dorothy worked as a teacher after graduating from Junior College in 1955. She was granted an Elementary Provisional Certificate which began her 38 year teaching career. She started teaching at Shirley School, a one room schoolhouse. While teaching, she earned her Bachelor's degree in Elementary Education from Pittsburg State University. She was contracted to teach at Cuppy School until it consolidated with Altoona Midway because there were only 4 students enrolled. She took this paid year off to begin her family. Her love for the classroom led her back to Roosevelt where she taught second grade and then was asked to move to Hutton School to teach first grade and kindergarten for USD 413 until she retired in 1996. Leaving the classroom was not easy for her, so she served as a substitute teacher for two years. In retirement, she enjoyed family time, exercising, journaling, crossword puzzles, and part-time work at Westco Home Furnishings. She married Jim McCoy on June 29, 1956 and he preceded her in death on February 3, 1994. The couple built their family over thirty seven years. Her children remember her as a loving, gentle mother who encouraged them to follow their dreams and grow in Christ. Following Jim’s passing, she met Bert Beck. They were married on June 8, 1996 and he preceded her in death in 2010. Dorothy attended church regularly, crediting her mother with this passion for Christ. She served Christ as a member of Colfax Baptist Church serving as treasurer, vacation church school superintendent, and Sunday School Children’s Supervisor. Following closure of her family church, she became a member of First Baptist Church and then First Christian Church. She enjoyed traveling with her sisters and brother-in-law, chauffeur and itinerary coordinator, Don, spending time with her family, and going to covered dish meals. She took pride in keeping her home neat and family close. She was an active member of many groups and enjoyed volunteering. Some organizations that were dear to her included The Red Hat Society, American Legion Auxiliary, Delta Kappa Gamma, Baptists Women’s Mission, Retired Teachers Association and Chanute Jaycees Dorothy is survived by two children: Roy (Erin) McCoy of Chanute and Linda (Julie) Barnes of Chanute. Two stepchildren: Larry (Debbie) Beck of Chanute and Jerry (Kimberly King) Beck of Chanute. Six grandchildren: Kristy (Jamie) Friederich of Chanute, Janet (Matt) Naff of Chanute, Tyler (Sara) McCoy of Chanute, Mallory (Megan Bartholomew) Guiot of Chanute, Jalynn Guiot (Sam Norris) of Humboldt, and Jacob Guiot of Independence, KS. Four step grandchildren: Ethan (Mary) Beck of Kalistell, MT, Mason Beck of Chanute, Jered Beck of Chanute and Jill (Gary) Klasen of Hutchison, KS. Five great grandchildren: Hunter and Drake Friederich, Kamri and Karter Naff, and Rhys Treiber. Seven step-great grandchildren Bryson, Briley, and Bradyn Peavy, Hazel Beck, Peyton Beck, Matticyn and Ashlyn Klasen and Many Nieces and Nephews. She will be met in Heaven by parents: Harry and Hattie Larson, infant son, Glen Ray McCoy, Brothers: Charles and Dale “Deke” Larson, Sisters: Helen (Don) Horton, and Mary (Clyde) Tunnell. The family will greet friends and family on Wednesday, January 8, 2020 from 6-8 pm at Countryside Funeral Home located at 101 N Highland Chanute, KS. Funeral services are scheduled for 1:00 pm, Thursday, January 9, 2020 at First Christian Church of Chanute. All are welcome to attend and celebrate Dorothy’s life. Online condolences may be left at: www.countrysidefh.com. The family suggests memorials to be made to Harry Hynes Hospice, ACARF or First Christian Church and may be left with or mailed to the funeral home. Arrangements have been entrusted to Countryside Funeral Home, 101 N. Highland, Chanute, KS 66720. The family would like to thank Country Place Senior Living for their attentive care and support.

Mrs. Dorothy Mae (Larson) McCoy Beck died peacefully surrounded by loved ones at Country Place Senior Living in Chanute, KS on January 4, 2020 at the age of 83. She was born on her family's homestead on a hot, hot 117° summer day on August 8,... View Obituary & Service Information

The family of Dorothy Mae (Larson) McCoy Beck created this Life Tributes page to make it easy to share your memories.