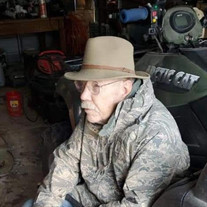 Douglas Edward McKenna, age 76 of rural Fredonia, died Thursday, Sept. 23, 2021 at his home. He was born Dec. 9, 1944 in Wichita to Wiles and Shirley (Robertson) McKenna. He attended schools in Texas and Colorado, graduating from Bailey (Colo.) High School, then earned an associate’s degree from Labette Community College. Described as “a man’s man,” Doug served in the United States Army during the Vietnam era, 1966 to 1968, working in Intelligence, and was honorably discharged due to medical reasons. He was an avid hunter and fisherman. Doug began his law enforcement career as a dispatcher in Wichita, and also worked in law enforcement in Lander, Wyo., before moving to Fredonia to be near his parents. He worked as a Wilson County deputy and later served as Fredonia Chief of Police, retiring in 2006. On July 8, 1983, he married Kellie Conard in Fredonia and she survives at the home. In 1986, Doug and Kellie moved to their home in rural Fredonia where they rescued dogs for 35 years. In addition to his wife, survivors include two daughters, Jennifer and Warren Reynolds of Fredonia; and Heather and David Howland of Independence; 10 grandchildren and 9 great-grandchildren, whom he loved dearly. His granddaughter Savannah Renee died in 1996, his parents also preceded him in death. A private family memorial service will be held, with military honors. Memorial contributions can be made in Doug’s name to Fredonia Pound Pals, and can be mailed to or left with the funeral home. Services entrusted to Countryside Funeral Home, 420 S. 20th, PO Box 247, Fredonia, KS 66736

Douglas Edward McKenna, age 76 of rural Fredonia, died Thursday, Sept. 23, 2021 at his home. He was born Dec. 9, 1944 in Wichita to Wiles and Shirley (Robertson) McKenna. He attended schools in Texas and Colorado, graduating from Bailey (Colo.)... View Obituary & Service Information

The family of Douglas Edward McKenna created this Life Tributes page to make it easy to share your memories.

Send flowers to the McKenna family.